For Polluted China, Gas is a Matter of life or Death 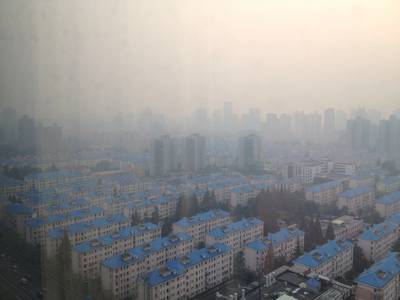 "If I work in your Beijing, I would shorten my life at least five years," Premier Zhu Rongji, a career politician from Shanghai, quipped in 1999, referring to the notorious air pollution in China's northern capital.

Research has confirmed life expectancy in northern China is 5.5 years shorter than in the south owing to the worse air pollution, and the shocking difference stems from a well-intentioned government policy to keep the residents of northern China warm in winter.

According to a group of U.S. and Chinese academics who have studied the impact of China's air pollution, "during the 1950-1980 central planning period, the Chinese government established free winter heating of homes and offices as a basic right via the provision of free coal for boilers".

"Due to budgetary limitations, however, this right was extended only to areas located in northern China," they explained ("Winter heating or clean air?", 2009).

To determine which cities qualified for free heating, planners employed the traditional division between northern and southern China that runs along the line of the Qin Mountains and Huai River.

The Huai-Qinling line is an arbitrary boundary dating to imperial times, though it corresponds roughly to the 33rd parallel of latitude and the zero degrees Celsius isotherm in January.


Free Heat
Under the Huai River policy, northern cities such as Beijing, Tianjin and Shenyang were provided with free heat from Nov. 15 to March 15 through district heating systems that pump hot water or steam from a network of boilers along pipelines to homes and offices.

Unfortunately, most of these heating systems are based on small and inefficient coal-fired boilers that belch soot into the atmosphere.

Coupled with old and inefficient coal-fired power plants, steel works and cement factories, many still located in the heart of urban areas, the result is an appalling smog across the country's north, northwest and northeast regions.


Unfair
"In contrast (to the north), heating was (and largely remains) nonexistent in the south because the government did not supply a heating infrastructure, nor was there a private supply until recently," according to the U.S./China research team.

As a result, cities just south of the Huai River - including Nanjing, Shanghai and Chengdu - are hit especially hard during cold winters, causing resentment.

"We have almost exactly the same weather as them, but they have heating and we don't," a resident of one city just south of the line complained in a newspaper interview. "We have to endure the cold more than anyone" ("China's unlikely divide over home heat", January 2013).

"Installing heating in the south is now a matter of social fairness," according to one editorial published in January 2013 following the coldest winter in three decades. "The use of the Qinling-Huai dividing line to create one-size-fits-all criteria for heating is neither reasonable nor scientific."


Five Years
Air quality is poor throughout China. The concentration of total suspended particulates (TSPs) in the atmosphere was more than double the national safety level between 1981 and 2001, and five times higher than the level that prevailed in the United States before the passage of the Clean Air Act in 1970.

But the situation is much worse in northern China. To the north of the Huai River, the concentration of TSPs is 55 percent higher than in the south, according to the U.S. and Chinese researchers ("Evidence on the impact of sustained exposure to air pollution", July 2013).

Life expectancy is also 5.5 years lower in the north "almost entirely due to an increased incidence of cardio-respiratory mortality", they explained. "Estimates suggest that the 500 million residents of northern China during the 1990s experienced a loss of more than 2.5 billion life years owing to the Huai River policy," they concluded.

So Premier Zhu was right: working in Beijing rather than Shanghai or Chongqing really can take years off your life.

Cleaner Gas
China is not alone in suffering lethal pollution from coal-burning. In the 19th and 20th centuries, London suffered a series of terrifying smogs blanketing the city in a foul mix of fog and pollution, culminating in the Great Smog of 1952, which is estimated to have killed as many as 8,000 people.

The result was the Clean Air Act of 1956, which introduced smoke control areas in some cities in which only "smokeless fuels" could be burned. Britain's pollution problem was gradually reduced by the introduction of the first electric heating in the 1960s and then natural gas from the 1970s.

To clean up its atmosphere and reduce the death toll, China needs to replace some of its coal consumption with cleaner-burning gas as well as install and actually operate scrubbers to reduce particulate emissions from the rest ("China's war on pollution needs more than words", March 12, 2014).

China has already been using natural gas for almost 2,000 years, employing bamboo poles to extract gas from shallow wells in Sichuan. There is still a natural gas industry centred on Sichuan in the country's southwest. More recently, natural gas has been produced along with crude oil from the country's giant Daqing oilfield in the northeast.

However, "gas production areas were scattered and relatively small", according to a study by General Electric. "Lack of infrastructure to transport gas to large cities meant supply was used near where it was produced" ("China's age of gas", 2013).

Since the 1960s, China has developed large quantities of "towngas" manufactured by partially burning coal and fuel oil, a process once common across North America and Western Europe before it was replaced by natural gas in the last 50 years.

In the last decade, China has begun to build a transmission and distribution network to bring natural gas from Sichuan, Xinjiang and the oilfields of the northeast, as well as imported LNG from the Middle East, and pipeline gas from Central Asia, to the cities of eastern and northern China.

Natural gas remains underutilised, however. "Gas accounts only for 4 percent of China's primary energy consumption, 19 percentage points below the world average," according to General Electric.

In the rest of Asia the average is 20 percent, and even in coal-dominated India it is 8 percent. Gas accounts for just 2 percent of China's power generation, compared with 75 percent from coal.

To cut pollution and improve energy security, China will need gas from all available sources: conventional deposits as well as shale in Sichuan and the Tarim basin; LNG from the Middle East and Australia; and pipeline gas from Central Asia and Siberia.

The enormous need for more gas helps explain why China has finally reached an agreement to take gas from Russia and why the deal is so important for both countries (not just Russia, as some analysts suggest).

More Pipelines
As well as more gas, China needs more pipelines to carry it across the country to consumption centres and distribute it to power plants, homes, offices and factories.

China National Petroleum Corp (CNPC) has built more than 40,000 km of gas transmission and distribution pipelines, including the two massive West-East transmission lines bringing gas from the Tarim basin and Central Asia to consumption centres along the east coast.

CNPC's smaller rival Sinopec has more than 4,500 km of pipelines, including a southern transmission line bringing gas from Sichuan to Chongqing, Jiangxi, Hubei, Anhui, Jiangsu, Zhejiang and Shanghai, and a northern line linking Shaanxi and Shanxi to the consumption centres of Hebei around Beijing and the industrial centres in Shandong.

But China's gas network remains relatively undeveloped. The United States has around 500,000 km of gas transmission pipelines, almost 10 times as much, and more than 3 million km of distribution lines.

The challenge is to build out China's inter-regional transmission network and city-level distribution system. Customer equipment may also need to be retrofitted to burn higher-calorific natural gas rather than lower-calorific towngas. Power producers must also be incentivised to shift from burning dirty coal to cleaner gas.

CNPC and Sinopec have been criticised as not developing the domestic market and infrastructure fast enough. Earlier this month, however, CNPC announced it would transfer the eastern sections of the two West-East pipelines into a separate subsidiary, and market a stake in the company to outside investors.

Current and former CNPC officials are at the centre of the current anti-corruption drive, which is a huge distraction for the company, but may also compel it to fall into line with the government's stated intention to develop the gas market more quickly.

Splitting pipeline assets into a separate subsidiary with outside investors raises the intriguing prospect that China could eventually have a transmission and distribution business operated on a common carrier basis, similar to those in the United States and Britain, with open access to the network for different producers and consumers.

China is still a very immature gas market. But the agreement on a new pipeline with Russia, coupled with the development of domestic resources and the restructuring of the pipeline system, mean that one day going to work in Beijing might not result in dying five years earlier.

(By John Kemp,Editing by Dale Hudson)