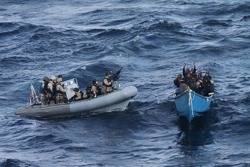 Piracy and armed robbery against ships off the coast of Somalia, in the Gulf of Aden and the wider Indian Ocean will be high on the agenda when IMO's Maritime Safety Committee (MSC) meets at the Organization's London Headquarters for its 90th session from 16 to 25 May 2012.

A High-Level Segment will be held on the opening day (16 May), intended to provide an opportunity for a full policy debate among Member Governments on how the international community should deal with issues related to the deployment of privately contracted armed security personnel (PCASP) on board ships and the carriage of arms on board.

The MSC has also received a number of submissions under the agenda item on “passenger ship safety”, which was added to the agenda in the wake of the Costa Concordia incident in January.

The busy agenda further includes the adoption of amendments to the International Convention for the Safety of Life at Sea (SOLAS) and consideration of other items submitted by the IMO  Sub-Committees.