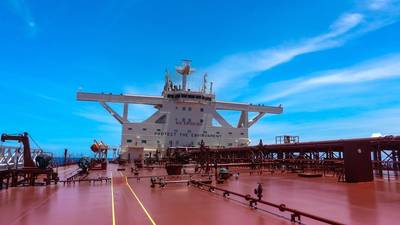 PDVSA expects to reopen the south dock of Venezuela's main oil port Jose by the end of September, easing strains on crude exports delayed due to a tanker collision last month, according to internal trade documents from the state-run oil firm seen by Reuters.

Besides Puerto la Cruz, tankers waiting to load a total 2.65 million barrels of Venezuelan upgraded and diluted crudes also plan to be serviced this month by two monobuoys at Jose, including cargoes scheduled for U.S.-based Chevron Corp and Russia's Rosneft, the documents showed.

But a 1-million-barrel cargo of diluted crude oil (DCO) scheduled to be lifted by Rosneft at Jose between late September and early October was cancelled, according to the documents.

Rosneft and PDVSA in April agreed to a "remediation plan" to refinance an oil-for-loan agreement after delays to deliver cargoes of Venezuelan crude on time. DCO shipments scheduled since then belong to that plan.

PDVSA did not immediately reply to a request for comment.

At least three other 500,000-barrel cargoes for Valero Energy and PDVSA's U.S. refining unit Citgo Petroleum plan to be loaded at Jose's available docks and monobuoys in the coming days, after delays.

Valero also would pick up two additional 600,000-barrel cargoes of Morichal crude after a maintenance project that would halt the 150,000-barrel-per-day Petromonagas crude upgrader in August was again postponed, allowing more production.

The country's oil output fell again in August to 1.448 million bpd, according to numbers reported by OPEC on Wednesday. Venezuela's accumulated annual production this year is 1.544 million bpd, the lowest since 1950.

Crew Training for a Future that Includes Autonomous Vessels