By Hugh Bronstein and Maximilian Heath May 29, 2020 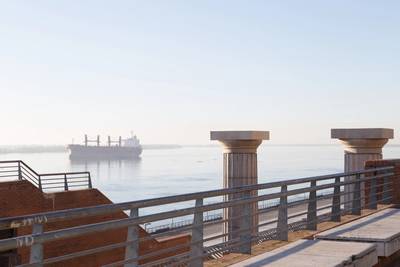 Shallow water in Argentina's Parana River will slow exports and hurt the country's soy crushing margins at least through September, officials said, as more cargo ships are needed to carry the same amount of commodities.

Drought has pushed the Parana to its lowest level in decades, complicating transportation and soymeal production.

An increasing number of ships are running aground and higher costs are pressuring margins at the giant soy crushing plants that make Argentina the world's top exporter of livestock feed, used to fatten hogs and poultry from Southeast Asia to Europe.

"The Parana is at its lowest level in 50 years. This prevents normal navigation and limits the amount of cargo that can be carried by ships, which adds to costs," said Omar Perotti, governor of Santa Fe province which is home to the grains hub of Rosario on the banks of the Parana.

The situation is not expected to improve until September, he said, reflecting a growing consensus among weather experts. Transport problems in Argentina can throw off world trade flows as impatient buyers look to rival exporters Brazil and the United States to fill temporary supply gaps.

A Chinese-owned ship hauling 42,000 tonnes of soymeal ran aground and was blocking traffic on Thursday at the Rosario port of Timbues, with tug boats working to free the vessel, according to port officials.

Some ships dropped anchor to wait it out while others lightened their loads, allowing them to navigate the crash zone.

While dryness of the river increases costs for soy crushers in Argentina, global agro-industrial companies with operations in the country, like U.S.-based Bunge, can compensate by way of increased margins in other parts of the world.

Rosario is home to some of the biggest soymeal factories in the world. They crush beans from Argentina and neighboring Paraguay, the world's No. 4 exporter of the oilseed. But the river's shallowness has delayed the arrival of barges from Paraguay.

Failure to receive Paraguayan soy on time generates delays in processing the bean and complicates compliance with international contracts, the Rosario grains exchange said in a recent report.

The latest data from Argentina's Coast Guard show the Parana's level at Rosario at 0.82 meters, on a scale in which zero is a reference point rather than the actual depth of the waterway. The normal median level for May is 3.68 meters. The level of the Parana is unlikely to recover until Southern Hemisphere spring rains start to hit the tri-border area of Argentina, Brazil, and Paraguay about three months from now, said local meteorologist Leonardo De Benedictis.

NYK Invests in Tugboat Biz at Largest Port in Vietnam