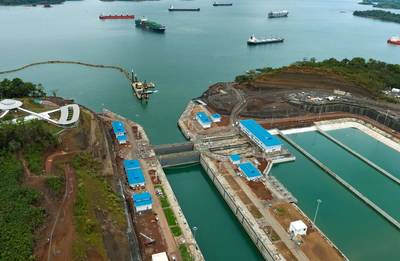 The expansion of the Panama Canal will take traffic through the inter-oceanic passage to a new level, which already handles around 6 percent of global trade transportation, its administrator said on Saturday.

With the expansion of the canal's width and depth, the volume of traffic will double, as Panamax-class vessels will now be able to pass through, carrying up to 14,000 cargo containers.

Jorge Luis Quijano, administrator of the Panama Canal, said at a press conference that this expansion, which will be inaugurated on Sunday, will open up new opportunities in sectors such as logistics and ship repairs.

The main contractor for the expansion was the consortium Grupo Unidos por el Canal.

Ilya Espino de Marotta, its executive vice-president in charge of the expansion, said that the budget for the project reached 5.43 billion U.S. dollars, higher than the initial figure of 5.25 billion.

Speaking at the press conference, Espino de Marotta said the project had gone very smoothly, considering the complexity of the works involved. "The expansion of the Panama Canal is one of those projects that happens once every 100 years," he said.

"It has been a milestone and a real source of pride to be part of history, which will officially begin when the ship Andronikos, belonging to China Cosco Shipping, makes the inaugural passage down the expanded Panama Canal," the executive said.