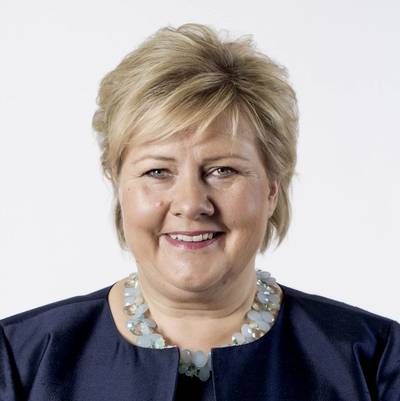 Norway’s Prime Minister Erna Solberg, along with Jan Grevstad, Norwegian Ambassador to the Republic of Korea, and other Norwegian government officials, visited Hyundai Heavy Industries (HHI) to meet with Choi Kil-seon, chairman and CEO of HHI, and Kwon Oh-gap, president and CEO of HHI.

During the meeting held at the HHI headquarters in Ulsan, South Korea, the prime minister showed particular interests in HHI that has been developing long-term business partnerships with the Norwegian companies and government in the areas of offshore exploration and production, and building of VLCCs and LPG/LNG carriers. Moreover, the prime minister called upon HHI to continue to cooperate with its partners in Norway for the mutual growth of both countries.
The Norwegian delegation led by the prime minister also made a visit to HHI’s offshore yard in Ulsan, and encouraged Norwegian supervisors working on the Aasta Hansteen spar hull project which is currently being built at the yard. In July 2012, HHI won the project from the Norwegian state-run Statoil in consortium with Technip, a French engineering company.
HHI has won a total of about 100 ships worth $8 billion from 27 Norwegian clients since 1979, and has also been building spherical Moss-type LNG carriers under technical partnerships with Moss Maritime of Norway. HHI has won a total of $10 billion worth of offshore facilities contracts from Norway including the world’s largest cylindrical-type Goliat FPSO capable of storing 1 million barrels of oil which HHI handed over to Eni Norge last year.
• Statoil • Technip • Erna Solberg