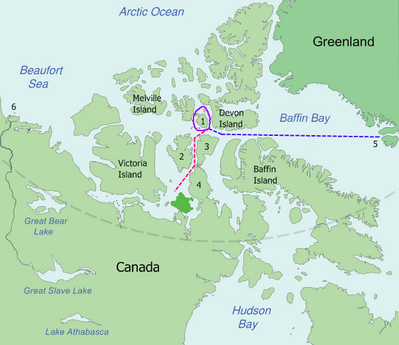 The Canadian government launches its largest search yet for the lost ships of Sir John Franklin's doomed 1845 quest for the Northwest Passage.

This year's search, led by Parks Canada, is the fourth government-led expedition over the past five years, and is by far the biggest, involving a much larger alliance of federal departments and other public and private interests. A previous large-scale search for the Franklin ships was launched by National Defence in 1967 as part of Canada's centennial.

Among the search participants, there are some like the Canadian Hydrographic Service that are contributing while completing other tasks. The CHS is already in the area charting the Arctic sea floor, something that is gaining significance as retreating ice opens northern waters to increased ship traffic.

The Arctic Research Foundation, a private, non-profit group, is also contributing a research vessel, the Martin Bergmann, a converted fishing trawler, it is in large part responsible for the expansion of the search from last year's one-week effort to this year's mandate of five or perhaps six weeks. It will try to take in two search areas, one more northerly and one more southerly, near King William Island.

While the lost ships have been declared a national historic site, a designation that falls under the purview of Parks Canada, their precise location is unknown.

The idea of trying to find the ships that set out in quest of the Northwest Passage is nothing new: the British Admiralty sent several missions, including a large one under Sir Robert McClure in 1850, to try to find Franklin.Those efforts, says Campbell, had an additional significance as they ushered in a new chapter in the exploration of the Canadian Arctic.

The CBC News report is available in full here.