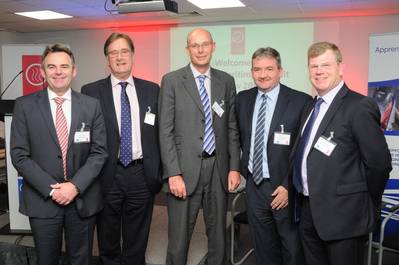 Mersey Maritime celebrated its 10th anniversary with a summit featuring presentations by business leaders from across the region's maritime sector.

Close to 100 members of the trade group - which represents more than 1,700 firms across the shipping, ports and logistics sector on Merseyside – gathered for the event at its headquarters in Monk's Ferry, Birkenhead.

The evening also marked the official handover of the chairman's baton from incumbent Ian Higby, of Atlantic Container Line, to John Hulmes, a partner and maritime solicitor with Hill Dickinson in Liverpool.

"Our journey started back in 2003 and our ambition was to find a way to put our sector back on the map," Mr. Higby said. "When maritime businesses were faced with ten-fold rates increases and, for many, the potential to be forced out of business, we galvanised the partnerships we had been nurturing for years with the media, local MPs and ministers and the Mersey and Humber Dock Ratings Groups.

“We took the debate right into the centre of Westminster, eventually acting on a national basis. When we succeeded in changing the government's thinking, one of our members hit the nail on the head. He said. 'This has showed us what can be achieved when people are prepared to stand up for themselves,.’”

“With your backing, we have supported companies directly, trained staff, found ways of improving procurement, attracted major international industry events and media coverage and brought inward investment. In 2009, we won ERDF funding to help and small- and medium-sized businesses and in 2012 we were awarded a further three-year contract extension.”

Mersey Maritime chief executive Jim Teasdale said the summit provided a terrific opportunity to celebrate the journey and key achievements of the private-public partnership over the last decade.

"It was a delight to share this special occasion with founder members, close partners, sector leaders and the businesses which make our region such a thriving and enterprising maritime hub," Mr. Teasdale said. “We believe Mersey Maritime has made great progress in the last ten years to unite the region's marine sector.”

"We take great pride in being able to represent a booming cluster of close to 2,000 businesses, employing 28,000 people with a combined turnover of £2.6bn. The summit provided a timely opportunity to reflect on how we have developed and crucially how we can work together to continue driving growth."

Celebrations continued with an official launch of a new wing at the Birkenhead site. The development will be used by Mersey Maritime's business management team, in turn freeing up space to develop the group's Maritime and Engineering College North West.

"The site expansion signals Mersey Maritime's ambition to continue growing," he said. "It will provide greater space and facilities to deliver our core services focusing on broad business support, education and skills. It will enable us to provide greater levels of service to help our members win more work and forge stronger supply chains.”

"Our membership figures are now at an all-time high and we are well positioned to make an even greater impact than ever before on the regional, national and international stage."