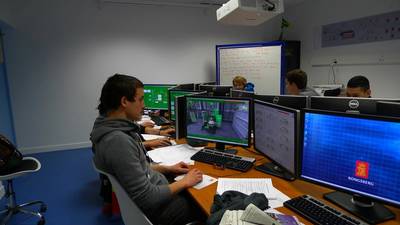 “We will use the new K-Sim Engine ERS to train for marine engine operation from 750kW to at least 3000kW Engineer level according to STCW,” comments Mathieu Guillée , Instructor at Lycée Maritime Jacques Cassard in Nantes. “K-Sim Engine is certified to STCW and IMO requirements. The fact that K-Sim Engine allows us to train to a very high level and that several other French schools already use it helped to make Kongsberg Maritime’s ERS the top choice for us.”

In addition to highly detailed, physically accurate engine models, a key aspect of K-Sim Engine is its sophisticated instructor system. The recently installed K-Sim Engine at another French facility, LPMA d'Etel, allows students to virtually track faults and restore the engine to normal operations, as if they were in a real engine room on a 60 meter trawler, whilst giving a huge amount of control to the instructor.

“It’s like being in the heart of a true engine room,” comment Metayer Didier, Professor at the Marine Engineering Faculty of Lycée Maritime d’Etel. “As instructors, we can create our own engine failure scenarios based on real conditions, so the students must act accordingly by taking control and following the correct procedures. In this way, students will be drilled to handle emergencies with competence and precision in order to minimise the negative outcome of an incident.”