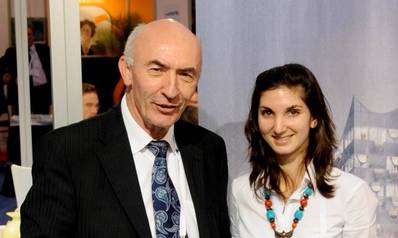 Drossel has managed the administrative office of the Hamburg Cruise Center e.V. since January 2009. Prior to this a member of the board of Hamburger Hafen und Logistik AG and having spent 40 years working for this company, he swapped freight shipping for passenger cruises.

"Being in that business for six years now and despite the clumsy settling-in period, I don’t want to miss the cruise industry anymore ” told Drossel the approximately 70 attendees at the Annual General Meeting of the Hamburg Cruise Center, held on 17 December.  Speaking on behalf of the members Dr Stefan Behn, Chairman of the HCC, thanked Drossel for his untiring efforts, which have been essential to the positive development of Hamburg’s cruise industry.

The Annual General Meeting unanimously elected Nadine Palatz, who has worked in the association’s administrative office since January 2007, as Drossel’s successor. She will taking up the position of Managing Director of the Board of Directors with immediate effect. During her eight years of employment with the HCC association Palatz has made a name for herself in the national cruise industry scene. In addition to this, she has been the managing director of the Atlantic Alliance since 2008, a joint marketing project of 18 western Atlantic ports. Thanks to this post as well as her involvement with Cruise Europe (from 2008 to 2010), a north European port federation with over 100 members, Palatz also has a good international reputation.

Palatz takes an optimistic view of the future and assured members that she has “lost none of the motivation and passion for the cruise industry in Hamburg with regard to the coming ninth year with the HCC association”. She is looking forward both to the new challenges as well as even closer cooperation with the city’s marketing bodies and the new terminal operator, Cruise Gate Hamburg. “Our objective in the future will be to further bundle the strengths and competences Hamburg has in the cruise segment since networks are the foundation for success,” continued Palatz.

The municipal cruise industry project “Cruise Net Hamburg”, a joint initiative of the public part of the Ministry for Economy, Transport and Innovation’s Central Office for the Cruise Industry and the private companies united under the umbrella of the HCC association will focus on making a contribution towards this bundling. The initiative’s executive instrument will be the Cruise Office, which will continue to be headed by Gerd Drossel as the Senior Project Manager.

The Cruise Office consists of the HCC administrative office and consulting company Uniconsult. Drossel will thus continue to be linked with the cruise business.

In order to manage the additional tasks for the HCC administrative office and the new tasks within the scope of the Cruise Office in a structured manner the HCC association has had a new crew member on board since 1 December. In her position as project assistant Ellen Rüdiger (27) is an addition to the team headed by Nadine Palatz. In her previous position as Assistant Shore Excursions with German cruise line TUI Cruises Rüdiger was able to gain valuable professional experience in the cruise industry. Now a resident of Hamburg, her first contact with cruise liners already took place while she was an undergraduate studying Business Administration in Rostock and Great Britain. She also worked as a tourist guide, showing cruise passengers the attractions of her home town, Rostock.

A number of other posts were also reallocated at the HCC General Meeting. Among others, Tine Oelmann, Director Port Operations, Shore Excursions & Ground Handling at TUI Cruises, was unanimously elected to the Board of Directors.