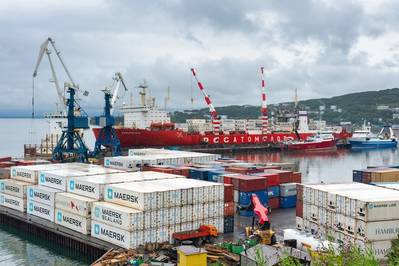 Shipping group Maersk still has vessels calling at Russian ports to deliver containers booked before the invasion of Ukraine began and to pick up around 50,000 containers stranded in Russia, Chief Executive Soren Skou said on Tuesday.

The company has temporarily halted new container bookings to and from Russia, as a consequence of what the Kremlin calls a “special military operation” in Ukraine.

“We have about 50,000 of our containers in Russia today. Most of them are empty, they are our property,” Skou said.

“We need them, and we are very reluctant to leave them in Russia. For this reason, we still have some port calls in Russia,” he said.

Maersk was also trying to get the containers out of Russia via rail, a spokesperson said.

Maersk is unlikely to be able to deliver all the containers booked into Russia before the invasion of Ukraine started, due to bottlenecks at Russian ports.

The company last year generated roughly 2.5% of its total revenue from Russia. It operates container shipping routes to St. Petersburg and Kaliningrad in the Baltic Sea, Novorossiisk in the Black Sea, and to Vladivostok and Vostochny on Russia’s east coast.

Maersk, which has been active in Russia since 1992, said last week it would sell all its assets in Russia, including its 30.75% stake in Russian port operator Global Ports Investments , whose shareholders include Russian state nuclear company Rosatom and Russian businessman Sergey Shiskarev.

“Russia has for many years been a large and important market for Maersk, but naturally we cannot continue operating critical infrastructure in Russia as if nothing has happened,” Skou said.

“We may not be able to return to doing business in Russia for many years to come. This is a price we are both willing to and able to pay.”

(Reporting by Reuters; Editing by Kirsten Donovan and Louise Heavens)