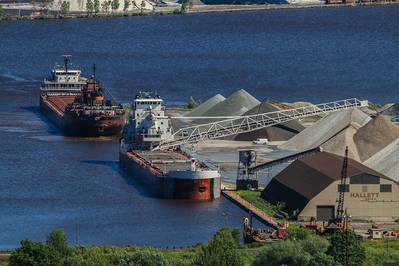 St. Lawrence Seaway shipping had its second busiest month of the season in October, fueled by increases in shipments of grain, salt and construction materials.

Overall cargo shipments via the St. Lawrence Seaway (from March 29 to October 31) totaled 30.5 million metric tons, up four per cent over the same period in 2017.

The increase in construction materials, like cement and clinker shipments which are up 20 per cent, can partly be attributed to cement moving into terminals in Ste. Catherine, Quebec and the Port of Oshawa.

Year-to-date, Canadian grain shipments reached 6.4 million metric tons, up 10 per cent compared to the same time period in 2017. An Australian drought is driving up global grain prices and leading to more demand for Canadian products.

The Port of Thunder Bay grain terminals are well stocked and rail car loadings at the Port are holding steady.

Salt shipments have significantly rebounded from earlier in the year due partly to international imports from Egypt and Morocco. North American salt was in short supply following a 12-week strike at the Goderich Mine in Canada that ended in July.

At the Port of Windsor, petroleum, salt and grain shipments this season are all tracking ahead of 2017’s strong volumes. Grain shipments from March to October 31 were up 12 per cent compared to the same period in 2017.

The cruise ship season at the Port of Toronto has wrapped up for the year. From May to October, 17 passenger ships made Toronto a port of call, bringing approximately 6,000 visitors to the city. This is an increase from the 2017 season, which welcomed 16 cruise ships. The Port of Toronto is expecting to double this total in 2019.

It has also been a busy season at the Port of Hamilton as the fall harvest makes its way from Ontario farms to grain terminals at the port.