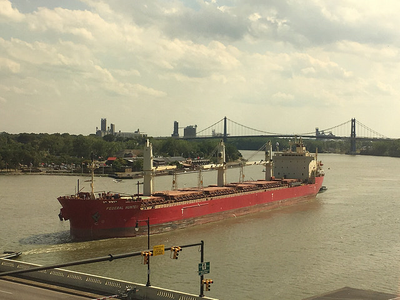 According to The St. Lawrence Seaway Management Corporation, total cargo tonnage from March 20 to October 31 reached 28.7 million metric tons – 2.5 million metric tons more compared to the same period in 2016.
“The star performers this year have been North American mined products such as iron ore and salt and high-value goods such as specialty steel imported from Europe,” said Terence Bowles, President and CEO of The St. Lawrence Seaway Management Corporation. “We’re now entering what are traditionally the busiest months of the Seaway shipping season as our domestic customers stockpile raw materials for winter production and Prairie and Ontario grain harvests are loaded onto ships for export.”
Year-to-date Seaway iron ore shipments (from March 20 to October 31) reached 6.6 million metric tons, an increase of 44 percent driven primarily by U.S. iron ore pellet exports to Asia. Dry bulk shipments (including products such as road salt, stone, gypsum and coke) topped 7.7 million, up 12 percent. General cargo (which include steel, aluminum, project cargo) shipments via the Seaway totaled 2.7 million metric tons, up 34 percent.
At the Port of Hamilton, imports of finished steel help supply southern Ontario's manufacturing sectors, such as automotive, appliances, and heavy equipment.
Ian Hamilton, President and CEO of the Hamilton Port Authority, said: “Steel volumes transiting the Port of Hamilton are trending 35 percent higher than this time last year, a strong indication of the health of Ontario manufacturing. More than 80,000 metric tons of finished steel was handled through the port in October alone.”
Canadian ship operators are also reporting much-improved demand for their services.
Algoma Central Corporation, which is the largest domestic ship operator in the Great Lakes-St. Lawrence region, reported a nearly 20 percent increase in its domestic dry-bulk business revenues for the nine months ended September 30, 2017 compared to 2016.
Gregg Ruhl, Chief Operating Officer of Algoma, said: “We’ve seen strong volumes in many of our cargoes, but particularly iron ore pellet exports from Minnesota that our ships are carrying to the Port of Quebec for transshipment overseas. We expect those exports to continue in the fourth quarter. Our ships are fully booked for the rest of the 2017 shipping season.”
Algoma was able to bring its newly-built vessel Algoma Niagara to Canada at the beginning of November — several months early – to help with the workload.
Ruhl added, “The Algoma Niagara has already delivered its first cargo of iron ore from Port Cartier to Hamilton and is moving on to its next jobs carrying other products such as Canadian grain exports. The Algoma Niagara has all of the operational and environmental advances of our other Equinox gearless bulker vessels but is our first new-build Equinox self-unloader. Being able to provide these benefits to customers in our self-unloading trades is something we have been looking forward to.” The Algoma Niagara is 45 percent more energy efficient per [metric ton] of cargo and the sixth company vessel to be equipped with a closed-loop exhaust scrubber system, which eliminates more than 97 percent of sulphur emissions.
• Algoma Central Corporation • Canada • energy