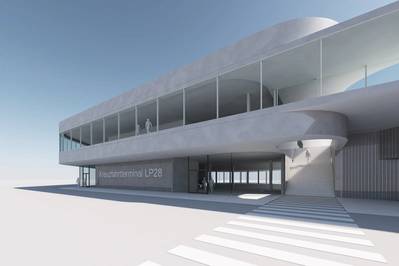 Photo courtesy of Port of Kiel

A second handling center for cruise ship passengers and their luggage is being built at Kiel’s Ostseekai Cruise Shipping Terminal.
Artist’s impressions of how the new building will look when complete have been made public for the first time at the ITB Berlin – the world’s leading trade fair for the travel industry. Dr Dirk Claus, Managing Director of the Port of Kiel  (SEEHAFEN KIEL GmbH & Co. KG) said:  “Sea tourism is a strong growth market sector for the port of Kiel. With a second terminal building we will be in a position to expand our capacities and increase handling quality.” In particular, the second terminal makes it possible to balance out individual operational processes.  Whereas previously two ships were handled by just one terminal at the Ostseekai Terminal, in future every ship will have its own handling terminal. According to Dirk Claus: “We are taking a great leap forward against a background of ever more visits by cruise ships and increases in the sizes of those ships. A terminal for every ship berth means the best possible service for shipping companies and passengers.” Construction work is expected to begin in August this year.
Completion and operation will follow next spring at the start of the 2019 cruise shipping season. The Port of Kiel  is investing about € 7.5 million ($9.2mln) in the expansion of the cruise shipping terminal.
Planned is a 3,700 m² two-storey terminal building designed by eins:eins architects Hillenkamp & Roselius within the framework of a co-operative workshop process. “The multi-phase workshop process format was seen as particularly suitable for this task because of the specific functional demands” said the Head of the Municipal Planning and Building Control Office Doris Grondke. “I am delighted that joint discussions with the port resulted in the realization of such an eye-catching concept for this important site on the fiord”, she added. The new structure will be built as an integrated northern extension of the existing terminal building with connections on both levels. The new building’s frontage picks up on existing surroundings and impresses with the transparency afforded by large glass surfaces. Structurally, the two buildings create a V-shaped reception area for arriving visitors. From here travellers can enter the terminal itself while visitors are led up an outside flight of stairs to a generously-sized viewing terrace. “We are increasingly opening up the port and turning what is happening around the big ships into a living experience for the public”, said Dirk Claus. Functionally, the new building is part of the existing terminal. While baggage handling is taking place on the ground floor, the upper floor will be reserved for passengers and check-in procedures. From here, travellers will be conducted directly across a gangway and onto the ship. Dirk Claus said “The new terminal building will replace two existing baggage halls. This is something which also has town planning significance”.
About the cruise shipping port of Kiel
The Port of Kiel is one of the leading passenger ports in northern Europe. Three modern passenger terminals are available in close proximity to the city centre for ferry and cruise ships - at the Ostseekai, Norwegenkai and Schwedenkai. In addition ships are able to tie up at the Berth 1 cruise shipping terminal in the Ostuferhafen. Kiel is also linked by daily ferry shipping services to and from the Norwegian capital Oslo (Color Line), Gothenburg (Stena Line), and Klaipeda (DFDS). During this year’s cruise shipping season 166 visits by 32 different cruise ships have been notified. The port expects more than 2.1 million travellers and, for the first time, 600,000 of them will be cruise ship passengers.  Kiel is the starting point for cruises to the big cities around the Baltic and on the Norwegian fiords. In addition however, the port is used by international passengers on running cruises as a stepping off point for land excursions throughout the federal German state of Schleswig-Holstein and to Lübeck and Hamburg.
• Color Line • Dirk Claus • Northern Europe