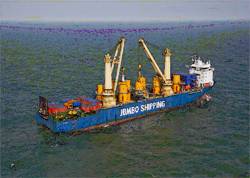 MT Højgaard has awarded Jumbo Offshore the transport and installation contract for all of the 111 Transition Pieces (TP’s) for the Anholt Offshore Wind Farm (Denmark). The 400 MW wind farm is currently being developed by DONG Energy. The Anholt Wind Farm is located in the ‘Kattegat’, near Anholt Island, and will be the largest offshore wind farm in Denmark. One of Jumbo’s DP2 Offshore Heavy Lift Vessels will install the TP’s on pre-installed monopiles, starting April 2012.
Anholt is a result of Danish government policy, which aims for a society independent of fossil fuels. In 2020, 30% of gross consumption should come from renewable energy. For the Anholt contract, the TP’s will be loaded at Bladt Industries (Aalborg, Denmark). Every TP weighs approx. 200 t, is 17 m tall and has a diameter of approx. 5.5 m.
Mobilization is planned in Rotterdam (The Netherlands) early April 2012. The mobilization will include a motion compensated access bridge (for safe access to the TP when the vessel is on DP), a grout plant, a purpose-built lifting beam, two passive lifting compensators of in-house design, grillages and seafastenings. The two 900 t Huisman mast cranes will be re-reeved to their project specific configuration.
For Jumbo, the contract is a recognition of the safe and efficient TP-installation works for the Greater Gabbard Offshore Wind Farm (UK). Jumbo’s all-in-one installation method will be largely repeated for the Anholt contract. This method consists of loading 9 TP’s at a time, transport them to the site and install them.
‘Jumbo’s installation method is a great match for this project and we are looking forward to working with them on the installation of the Transition Pieces on Anholt Offshore Wind Farm’, says Kim Reinhard Andersen, Energy & Resources Director at MT Højgaard. When the 111 foundations are in place, MT Højgaard will have installed a total of 560 offshore windmill foundations, which is more than any other contractor in the world.