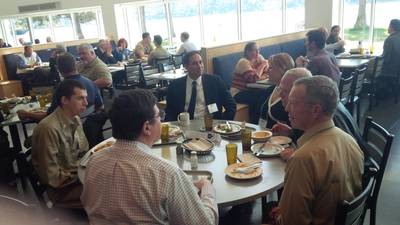 America’s maritime strength depends upon U.S. merchant mariners who serve aboard ocean-going commercial, sealift, and military vessels. That’s why the Maritime Administration (MARAD) places such a high priority on education at the United States Merchant Marine Academy at Kings Point (USMMA) and why MARAD also provides strong support and guidance to the six state maritime academies in California, Maine, Massachusetts, Michigan, New York, and Texas.
Together, these institutions educate and train our future merchant mariners for good careers that also benefit our country.
Recently, I joined the cadets at the California Maritime Academy in Vallejo. I am always eager to talk with our next generation of mariners, the proud young men and women who will one day help power American prosperity at sea. As a mariner, I understand the dedication and hard work required to achieve a bachelor’s degree and a Merchant Mariner’s license – for some, two licenses. That’s why it was so rewarding to talk one-on-one with the Cadets and learn about their experiences like training at sea onboard the GOLDEN BEAR, a beautiful vessel provided to Cal Maritime by MARAD.
I was especially pleased to share our Nation’s continued support for our future mariners and the hard work the Obama Administration is doing to deliver top-notch maritime education. I explained that President Obama understands the vital role of our merchant mariners and our maritime industry.
For instance, since 2009, this Administration has provided more than more than $116 million in funding to our state maritime academies. About $17 million in additional funding has come through sales of obsolete vessels from MARAD’s National Defense Reserve Fleet. The money has supported facility and training ship maintenance, modernization, the purchase of simulators for training, and training ship fuel.
That’s not all—President Obama’s 2016 Budget includes $5 million for the design of a National Security Multi-Mission Vessel (NSMV). The NSMV would be the first purpose-built Academy training ship. The first one will replace the EMPIRE STATE, New York Maritime’s 53-year old training ship. It would also be capable of supporting our national interests by deploying in response to emergency and humanitarian assistance missions.
MARAD’s investments in our maritime academies demonstrate the President’s commitment to a viable and healthy merchant marine. Through our continued support, we are working to guarantee that skilled, trained, and experienced U.S. mariners are available to assure a robust future for America.
About the Author
Mike Rodriguez is Deputy Administrator of the Maritime Administration.