Infrastructure Funds a Boost for the Missouri River 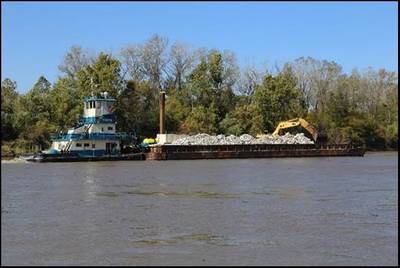 The U.S. Army Corps of Engineers, Kansas City District is set to receive approximately $278 million under the Infrastructure and Investment Jobs Act (IIJA).  Almost $249 million of that is to repair damages caused by the 2019 flood to the Bank Stabilization and Navigation Project along the Missouri River (within the district boundary) from Rulo, Neb. to St. Louis, Mo.

In addition to Missouri River repairs, several lakes in the Heartland area will benefit from the IIJA.

Tuttle Creek Lake in Manhattan, Kan. will receive $15 million to repair rock embankments on the dam and perform other dam maintenance and infrastructure repairs throughout the parks and campgrounds.

Overall, the U.S. Army Corps of Engineers received $17.1 billion IIJA funds across the nation for its Civil Works programs, projects and activities that will help the nation address current and future water resources infrastructure needs. The act’s appropriations also enable the Corps of Engineers to regulate development in waters of the United States.

The IIJA was passed by the U.S. House of Representatives and President Joe Biden signed it into law in November. The U.S. Army Corps of Engineers submitted a detailed spend plan to Congress as required by January 14, 2022, 60 days after enactment of the legislation. The projects receiving funding were announced January 19, 2022.