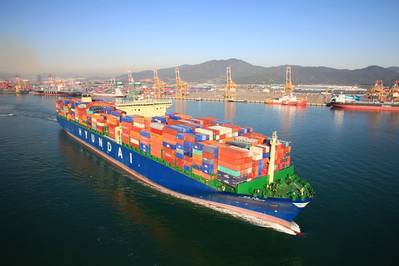 The larger ships will be deployed on Asia-North Europe routes while the 14,000 TEU ships will serve the U.S. East coast trade.

Government Push
HMM is under control of the government-owned Korean Development Bank (KDB), and its vessel orders are part of a strategic initiative to breathe new life into the nation's struggling shipping and shipbuilding sectors.

"[The government] wants to order more ships for ocean service while focusing on consolidation on intra-Asia trade where several Korean shipping companies are fiercely competing," Park said. "Currently just HMM and SM Line are providing ocean service so there are not many alternative ways to increase the fleet size which will be employed in the ocean service."

Overcapacity
HMM’s orders come as overcapacity remains an issue for the global container shipping sector. Ultra large container vessel (ULCV) deliveries have increased dramatically in the last few years, with 76 new ULCVs either delivered or scheduled to be during 2018, compared to 43 delivered last year and 29 in 2016, according to VesselsValue.

"Economically, it would be difficult to make a profit as there still exists oversupply and especially high orderbook in the 20,000+ TEU sector," Park said.

"There is also the problem of how HMM could fill the capacity of those big ships," Park said. "For this, the government is planning to encourage Korean cargo owners to use Korean ships."