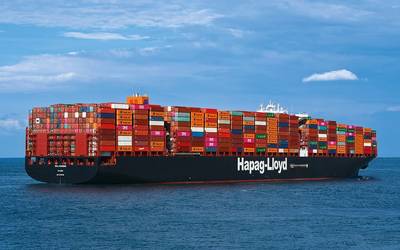 German container shipping group Hapag-Lloyd on Thursday reported first-quarter net profit of 4.2 billion euros ($4.4 billion), more than triple the number a year ago and, forecast another strong performance for the second quarter.

"The year has got off to an exceptionally strong start on the whole, and whilst there have been first signs that the market has passed its peak, we also expect a strong second quarter," Chief Executive Rolf Habben Jansen said.

Many ports are still congested, and infrastructure is strained, which together is resulting in longer turnaround times for ships and containers.

Jansen, in a call with Reuters, said the tight supply-demand balance was expected to ease in the second half of the year.

"The world economy is weakening, we notice that in the day-to-day," he said. "And in the second half, vessels ordered maybe a year and a half ago will be delivered by the shipyards," he added.

The company, the world's fifth-biggest container shipping group, stuck with preliminary forecasts made on April 28 for 2022 EBITDA to range between 13.6 and 15.5 billion euros, and for EBIT to come in between 11.7 billion and 13.6 billion euros.

Revenues in January-March rose to 8 billion euros, largely thanks to average freight rates being achieved at $2,744 per twenty-foot equivalent standard container unit (TEU), versus $1,509 a year earlier, and also benefited from a stronger dollar.

Shipping fuel costs were at an average $613 per tonne in the first quarter, up 60% year-on-year.