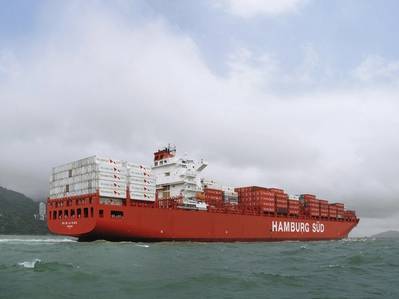 Overview of Hamburg Süd growth
Growth in the global economy and containerized transportation by sea in 2013 was slightly below the level of the previous year. Once again, available global slot capacity outpaced container transport volume as deliveries continue to exceed the level of scrappage, which also increased. As a consequence of the continuing overcapacity, freight rates in most trades remained under pressure or declined still further. The only positive support came from fuel prices, which have fallen slightly from the highest level of the previous year.

Due to subdued market growth and operational problems in the vastly overstretched ports in Brazil, Hamburg Süd and its Brazilian subsidiary Aliança were only able to increase transport volume in liner services by 1 percent year-on-year to around 3.3 million TEU (1 TEU = 20 foot standard container). With freight rates falling slightly and devaluation of the most important earnings currency (US dollar) by around 4 percent as against the euro, total revenues of the business field shipping fell by 3.9 percent to €5.3 billion.

In 2013, worldwide bulk shipping was still marked by substantial overcapacity and transport volumes – particularly to China – falling below expectations, even if there was an apparent improvement towards the end of the year. Overall, Hamburg Süd’s bulk business and product tanker business failed to generate positive results last year. Liner services were slightly better than the previous year, and also performed well by industry comparison.

Despite the unsatisfactory business environment, investments totaling €450 million were considerably above the level of the previous year (€247 million). These investments mainly comprise installments and final payments for twelve 9,000/9,600 TEU ships and four smaller 3,800 TEU newbuilds.

Business environment
Trust in the European markets was only partially restored in 2013. Continuing high levels of debt in some states contributed towards subdued growth in the eurozone. After the end of the budget crisis in the USA, there was a slight improvement in economic growth and positive developments on the employment markets. The Chinese economy expanded again by around 7.7 percent, thereby meeting expectations. In contrast, growth in Brazil remained unsatisfactory. Weak economic development, rising interest rates and inflation, and serious infrastructure challenges were a cause for concern. Overall, global economic growth of around 3.0 percent was somewhat weaker than in the previous year.

While worldwide container transport increased by 3.7 percent in 2013, global slot capacity increased by about 6 percent (1.0 million TEU) to 17.3 million TEU. Scrappage reached record levels of around 500,000 TEU in 2013 (over 200 ships), but net capacity continued to grow due to the high volume of newbuild deliveries during the year. Orders also increased again, with new orders in the financial year 2013 for 234 ships with a total capacity of 1.83 million TEU and a total value of $16.8 billion, or 1.34 million TEU more than in the previous year. At the end of December 2013, the order book again stood at more than 20 percent of the worldwide operative fleet capacity. In the segment for 9,000 TEU ships alone, the order volume increased from around 50 to around 150 ships over the course of just a few months.

Due to substantial overcapacity, charter rates for most ship classes remain under pressure. Average rates for Panamax ships (4,400 TEU gearless) in 2013 of $8,700/day were only slightly above the historical low in the summer of 2009, and barely covered operating costs, let alone interest costs and capital repayments. Numerous German shipowning companies became insolvent during the reporting year. Banks offering ship finance still need to make substantial write-downs to their loans.

The overcapacity means that there is no scope for the restoration of freight rates that is so urgently required for liner services worldwide. Increases were only possible for individual services for a limited time. The freight rate recovery for refrigerated goods during the first half-year did not last. Over the course of 2013, rates for most services fell back to a level that is wholly insufficient in light of the high level of investment, operating costs for reefer containers and on-board equipment.

Fuel prices reached an annual high of $646 per metric ton during the first quarter 2013. Over the further course of the financial year, the average price for heavy diesel fell to just below $600, with an annual average price decline of around 7 percent.

The business environment for bulk shipping is heavily determined by Chinese coal and ore imports for steel production. In 2013, the People’s Republic imported 801 million metric tons of iron ore and 214 million metric tons of coal. Year-on-year growth was 10.7 percent and 19.6 percent respectively. Global bulk transport increased by around 5.5 percent. At the same time, newbuild deliveries of bulk carriers capacity of around 62 million tdw were considerably lower than in the previous two years (each around 100 million tdw), despite consistently high levels of scrappage of old tonnage. At the same time, there was only a minimal improvement in bulker charter rates during the course of the year. The same applies to product tankers, which failed even to cover operating costs.

Hamburg Süd ships and containers
As of December 31, 2013, the Hamburg Süd fleet comprised a total of 154 ships, 45 of which were owned by the group. Of these, 103 ships were employed in liner services, and 51 chartered-in ships were employed in tramp operations (bulkers, product tankers). During the course of the reporting year, the fleet of owned ships was expanded by the first four newbuilds of a total of six ships in the Cap San series. With a capacity of 9,600 TEU, these are the largest-ever ships in the Hamburg Süd Group. They have 2,100 reefer slots on board, and are therefore the world’s largest reefer capacity vessels. The new ships were introduced into the services between Asia or Europe and the East coast of South America. The Hamburg Süd subsidiary Aliança also introduced four 3,800 TEU ships in the Brazilian cabotage service. These wide-beam newbuilds set new standards for cost efficiency on the South American East coast. Three older Panamax ships of the Bahia series (3,800 TEU) were sold at the end of 2013, and another three at the start of 2014. The available slot capacity in liner services increased by around 6 percent to approximately 457,000 TEU, and the average ship capacity by 7 percent to 4,437 TEU.

Hamburg Süd Group is continuing its strategy to further improve the efficiency of its fleet. The increasing average capacity of its vessels is the basis for a constant reduction in cost per slot.

At the end of 2013, the order-book for Group-owned ships to be delivered in 2014/2015 was around 78,000 TEU. The total number of containers remained virtually unchanged year-on-year at around 458,000, thus reflecting the moderate growth in cargo volume.

Liner services
Against a background of a strong recovery in freight rates in the worldwide transportation of refrigerated goods, liner services had a much better start than in the previous year. Due to unsatisfactory volume growth and overcapacity in the Asian services, earnings were under considerable pressure during the rest of the year. The growth in carryings was weaker than expected; strikes in Chile at the beginning of the year, overloaded infrastructure in Brazilian ports, and political and economic problems in Venezuela and in Mediterranean countries had a negative impact on cargo operations. The service between Europe and India/Pakistan – which suffered a rather dramatic fall in rates from time to time – was particularly disappointing. Owing to unsatisfactory seasonal business on the Asia routes, many services already adjusted their capacity from the beginning of December in anticipation of falling volumes in the off-season. Some individual routes or whole services are not being offered for several months, and ships are being laid up in order to reduce system costs and to offset at least some of the earnings shortfalls.

Relief came in the form of a slight fall in bunker prices, the successful implementation of service rationalizations, and measures to reduce bunker use.

Overall, Hamburg Süd was able to post a slight year-on-year improvement in results from liner services, although due to rate pressure in the Asia-South America services, the still unsatisfactory development of activities in the Mediterranean and the service between Europe and India/Pakistan, none of our targets with respect to overall earnings have been met.

Tramp shipping
Neither bulk carriers nor product tankers generated positive earnings in 2013. Their results were at the same level as last year.

Outlook 2014
Economic conditions should improve in 2014. According to the International Monetary Fund (IMF), the global economy should grow by 3.7 percent, and world trade by 4.5 percent, with the U.S. economy in particular set to become more dynamic. In the eurozone, all signs point to some countries coming out of recession, even if high public deficits continue to be a cause of concern in many countries. Despite positive impulses from the soccer world championships, there is no sign of a sustained solution to Brazil’s economic issues. Growth in the Chinese economy will also be of decisive importance over the coming year.

Even if the overall positive outlook as regards the growth of the world economy and trade should turn out to be correct, we do not yet expect a sustained recovery of container liner services over the next year. This is mainly due to continuing increases in overcapacity. Although many liner shipowners and the German shipowning companies that are so traditionally prevalent in the container segment mostly remain highly indebted, the number of orders for new ships is rising again. Indirect government support from the large shipbuilding countries Korea and China, and private equity, mainly from the U.S.A., are shoring up ship financing despite the failure of the German KG-company system. The trend towards ever larger and more fuel-efficient ships continues. At the same time, older ships are not being scrapped at a sufficiently comparable rate. The recent revelation of a delay of at least a year in the expansion of the Panama Canal – the expanded canal is not expected to open now until 2016 – will mean that older Panamax vessels will remain in service longer, whilst the newbuilds ready to step into service cannot yet be utilized as originally planned.

It remains to be seen if the intended pooling of operations of the world’s three leading players Maersk, MSC and CMA CGM on the major East-West routes will be successful in the long run, or if it will provoke similar joint ventures or even mergers.

Hamburg Süd will expand its activities in the core services to and from South America and add to its network where it makes sense. Based on a high owned share of modern ships and containers, the focus of corporate management in 2014 will remain a continual improvement of all cost positions.

This year should see increases in revenues and charter rates in bulk shipping due to uninterrupted global growth in volume of 5-6 percent per year and a decrease in newbuild deliveries. The tramp business of the group operated by Rudolf A. Oetker, Furness Withy and Aliança Bulk is expected to increase results in 2014, though not to an acceptable level. The same applies to product tanker operations.

Overall, the company anticipates that the shipping group’s operating result for 2014 will be at about the same level as last year.

The high level of investment to renew the Group’s in IT equipment continues, along with the projects to reduce the environmental impact of our ship operations and improve the sustainability of our business activities. We are preparing our fleet for the introduction of the increased requirements under MARPOL IV as regards reduction of emissions. This includes the use of low-sulphur fuels in coastal waters, and equipping our ships that operate on the U.S. West coast with facilities to receive shore-side electricity. Initially, the additional operational cost of Hamburg Süd will increase by at least $40 million per year. Due to the strong pressure on earnings and the overall less than satisfactory results, the company will be forced to pass on these additional costs to shippers as surcharges.