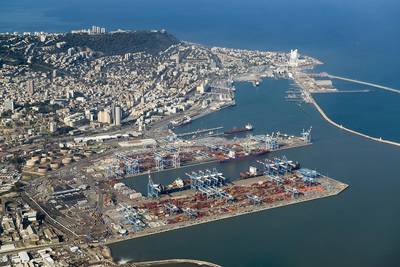 Following the Port Reform Agreement that was signed on December 2018 - Haifa Port Company, the operator of all current terminals in Haifa Port, reports a total throughput of 26,264,000 metric tons and 1,464,000 TEUs in 2018, and it continues to be the largest and leading port in Israel in total cargo handling.

This achievement was gained thanks to excellent level of service and good employment relations which distinguishes the Haifa Port from other major ports in Israel.

One of the highlights of the previous year was the Port Reform Agreement that was signed between the management of Haifa Port Company and the General Organization of Workers in Israel (The New Histadrut), backed and approved by the Ministries of Transportation and Finance of the Israeli Government. The Agreement includes a massive Port efficiency plan, alongside an extensive retirement plan, and mainly, a full privatization plan. That means that the 100% Governmental owned company – will be looking for a strategic partner\owner that will be able to take full control (100%) of the company. The process of selling the port's ownership will be managed by the Government Companies Authority - a professional unit in the Israeli Ministry of Finance. The parties also agreed on a massive investment plan in both the General Cargo and the Containers Terminals.