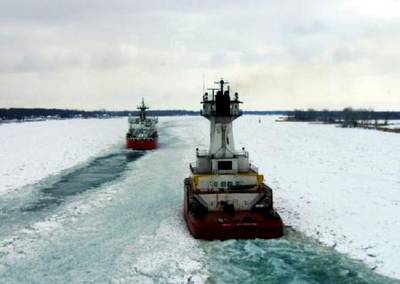 The US Coast Guard says that its nine Great Lakes icebreakers put in nearly four times as many icebreaking hours the first quarter of this fiscal year as compared to previous years, due to harsh winter weather.

Pictured to the right: the crew of Coast Guard Cutter Mackinaw and the crew of tug Joyce L. Van Enkevort cut through the ice as they escort motor vessel Algoway through the southeast bend in the lower St. Clair River near Harsens Island, Feb. 2, 2014. The crew of Mackinaw is assisting in Operation Coal Shovel one of two ice-breaking operations conducted in the Great Lakes.