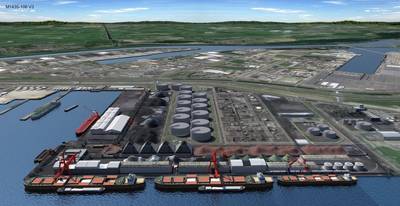 File Image: A rendering of the The HES Terminal in the Port of Rotterdam (CREDIT: HES)

A consortium of infrastructure funds at Goldman Sachs and Macquarie is seen as the front runner in the sale of European bulk port terminal operator HES International, worth around 2 billion euros ($2.5 billion), industry sources said.
Morgan Stanley is mandated to sell the asset, two sources, whose organisations had considered bidding for it, said. They added that the expectation Goldman Sachs and Macquarie would win put off some prospective bidders.
The sources, both in the infrastructure investing industry, said the growth projections provided by the company were too aggressive. Final bids and a winner were expected in mid-March.
Another source said “less than a handful” of bidders remain, but none had emerged as a clear favourite.
HES, owned by energy and power-focused private investment firm Riverstone and private equity firm Carlyle, delivers around 100 million euros in earnings before interest tax, depreciation and amortisation (EBITDA), the two sources said, estimating it would achieve an enterprise multiple in the 20s times EBITDA.
Riverstone, Carlyle, Morgan Stanley, Macquarie and Goldman Sachs declined to comment.
HES provides transhipment, storage, blending and processing services of dry bulk and liquid bulk products at 19 sites across eight countries, with more than 1,350 staff. A spokeswoman for the company could not immediately comment.

By Dasha Afanasieva and Toby Sterling