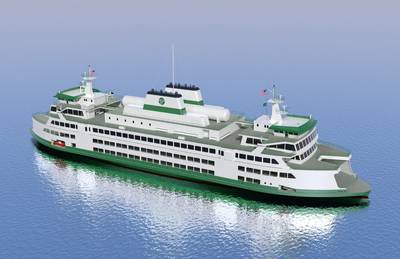 The Glosten Associates announces completion of a feasibility study for Washington State Ferries (WSF) on converting its 144-car ferry design to liquefied natural gas (LNG) propulsion. Glosten’s study, which investigated design, economic, regulatory, and environmental issues, concluded that the conversion is both technically feasible and cost effective, although technical and regulatory challenges remain.

To support the study, Glosten developed a preliminary design for both dual fuel and single fuel (LNG only) engines. The operational savings for a single vessel are estimated to be between $0.9M and $1.25M per year, after an upfront capital cost premium of $8.5M to $10M. Switching to natural gas fuel will significantly reduce emissions of nitrous oxides, sulfur oxides, particulate matter, and carbon dioxide, which have been identified by the Environmental Protection Agency as pollutants that cause significant harm to human health and the environment. However, the study found that methane slip from the engines counteracts its reduction in carbon dioxide emissions, minimizing the global warming benefits of switching to the lower carbon fuel.

Glosten’s design was formally reviewed by the United States Coast Guard (USCG). USCG provided extensive feedback as well as a written response, showing their willingness to work with owners early in developing a case-by-case design basis until official rules are developed. The USCG response provides WSF with a regulatory basis from which to advance the project design. This is an important result, as the lack of USCG regulations is often cited as a primary risk to vessel owners interested in reaping the benefits of LNG fuel conversion. WSF vessels are normally certified under 46CFR Subchapter H, and must also meet the applicable requirements in Subchapters F and J. As these do not address LNG fuelled propulsion, the USCG has accepted the supplemental use of IMO’s Interim Guidelines on Safety for Natural Gas-Fuelled Engine Installations in Ships for this project.
WSF is investigating LNG conversion for other vessels, using similar design features as applied to the 144-car ferry. This recent study builds on Glosten’s 2010 study investigating the use of LNG fuel in WSF vessels.