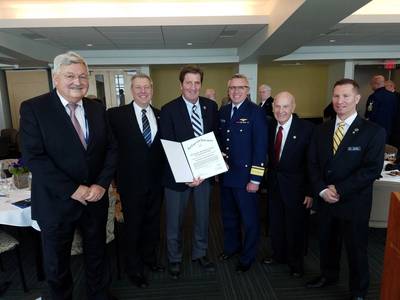 Garamendi receives the Hirsch Award from the Navy League of the United States (Photo: Navy League)

U.S. Congressman John Garamendi (D-Fairfield, Davis, Yuba City, CA), Ranking Member of the Subcommittee on the Coast Guard and Maritime Transportation, received the Vincent T. Hirsch Maritime Award for Outstanding Leadership from the Navy League of the United States. The ceremony occurred at the California State University Maritime Academy. The Hirsch Award is presented to a distinguished American who has been singularly effective in creating a broader understanding of the importance of the Merchant Marine and the maritime industry to national security.

“America is a maritime, seafaring nation. Our maritime and shipbuilding industries and the U.S.-Flag Merchant Marine are vital to both our economy and our national security,” said Garamendi. “It’s a great honor to receive the Navy League’s Hirsch Award, and I’m looking forward to continuing our collaboration to rebuild these crucial American industries.”
“Congressman Garamendi has always been a strong supporter of our sea services,” said Alan Kaplan, National President of the Navy League. “He has been one of the greatest champions of the U.S.-flag Merchant Marine in Congress, and understands why our country must invest in this valuable service. We are proud to present this award to someone with such a remarkable record of support. His is a great American who understands that we are a maritime nation.”
Garamendi’s legislative efforts have led to the creation of language directing the Secretary of Transportation to develop guidelines to promote the use of U.S.-flag ships and American mariners in the export of liquefied natural gas (LNG), and have resulted in increased funding for the Maritime Security Program. His legislation, the Energizing American Shipbuilding Act, would spur investment in domestic shipyards, job creation, and skills training while enhancing national security. It would put 2,500 American Mariners to work and create thousands of jobs in shipyards and at manufacturers across the United States who supply steel, pumps, electrical components, navigational equipment, and more.
• liquefied natural gas • navigational equipment • Navy League