First-Quarter Returns From the Universal Port of Hamburg 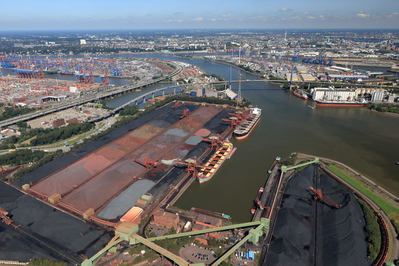 This year’s first-quarter throughput total at the Port of Hamburg was notable for a rise in conventional general cargoes, a lower figure of bulk cargoes, a stable trend in container handling and distinct growth on container transport services by rail.

“A glance at handling trends for first-quarter handling of loaded and empty containers indicates that on the one hand, the Port of Hamburg still continues to gain cargoes, but on the other has to accept a sharp drop in the volume of empty containers,” said Axel Mattern, Joint CEO of Port of Hamburg Marketing. “Against the background of the not yet implemented adjustment of the fairway of the Lower and Outer Elbe, shipowners are primarily using their slot capacities on ULCVs calling at Hamburg for loaded boxes. With general cargo volume almost equally balanced between import and export tonnage, Hamburg is extremely attractive for shipowners aiming for optimal utilization of their vessels. Whether for import or export, a mass of cargo beckons in Germany’s largest port. By contrast with loaded boxes, empty ones are less port-related and routing these is therefore a more volatile process.”

“China is by a wide margin the Port of Hamburg’s most important trading partner. We can report a distinct advance of 4.5 percent in container traffic with the Peoples’ Republic. Substantial growth also occurred on container services with Brazil (up 37.7 percent), Sweden (up 38.5 percent) and Israel (up 63.8 percent). New or expanded liner services between Hamburg and these countries are one reason for the positive trend,” said Ingo Egloff, Joint CEO of Port of Hamburg Marketing.

Preliminary data indicate an upswing in first-quarter transhipment services by feedership in Hamburg. At 829,000 TEU, the figure for transhipment boxes handled in Hamburg was down by 3.6 percent on the first quarter of 2017. Of this fall, 94 percent was attributable to empty box handling. The landside seaport-hinterland traffic achieved a stable result of 1.3 million TEU in the first quarter. Container transport by rail made excellent progress. In the first three months 612,000 TEU were transported on Port of Hamburg rail services. This represented an advance of 4.1 percent, underlining Hamburg’s leadership as a rail port. Around 13 percent of all German rail freight traffic starts or ends in the Port of Hamburg. Offering 2,100 container train services per week, Hamburg is well connected with all Germany’s most economically active regions, as well as those elsewhere in Europe and China.