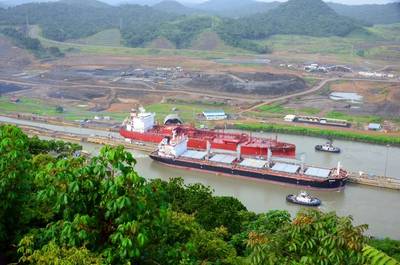 Draught conditions have led the Panama Canal Authority (ACP) to set draft restrictions for vessels operating in the canal.
ACP described the restriction as temporary and preventive measure due to the El Niño climate phenomenon resulting in periodic warming of the tropical Pacific Ocean. When this occurs, El Niño changes the pattern of rainfall in many regions of the planet, in this case triggering a drought in the Canal Watershed, causing water levels of Gatun and Alhajuela Lakes to fall substantially below their average for this time of year.
Accordingly, from September 8 the maximum authorized transit draft will be set at 11.89 meters Tropical Fresh Water (TFW). ACP also anticipates that the draft may be restricted to 11.73 meters (38.5 feet) starting September 16.
The draft restrictions are not expected to significantly affect the efficiency or capacity of canal operations since only 18.5 percent of the vessels transit with drafts greater than 11.89 meters, according to ACP.
Vessels loaded on or after August 11 must comply with the restrictions and may be required to trim or offload cargo, depending on the actual level of Gatun Lake at the time of the transit, advises maritime and cargo services provider Inchcape Shipping Services (ISS). Where the lake level allows, the transit of vessels at deeper draft may be permitted. Vessels may load to drafts deeper than 11.89 meters up to 12.04 meters after August 11 provided that they transit prior to September 8.
ACP said it will continue to monitor the water levels of Gatun and Alhajuela Lakes, providing at least four weeks’ notice should further draft restrictions become necessary. Conversely, ACP will lift the draft restriction should rainfall increase.
The Panama Canal said it has responded to situations with similar conditions in the past, most recently for the El Niño phenomenon during the 1997-1998 season. Howvwer, this is the first time that the Panama Canal has imposed draft restrictions this far into the rainy season due to the El Niño weather pattern, ISS noted.
• Canal Authority • Gatun Lake • Inchcape Shipping Services