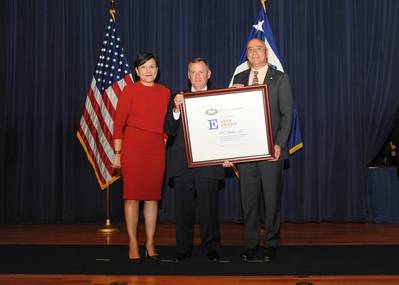 DSC Dredge, LLC, based in Reserve, La., has received the 2016 President’s “E-Star” Award for exports.
In a ceremony held on May 16, 2016, at the U.S. Department of Commerce’s headquarters in Washington, D.C., Department of Commerce Secretary Penny Pritzker said, “These companies demonstrate the opportunity inherent in selling Made-in-America products to the broad customer base that exists outside our borders. Their success contributes to growth, job creation, competitiveness, and the success of the American economy.”
During her remarks, Secretary Pritzker singled out several companies, including DSC. “From Louisiana, we are very pleased to welcome Bob Wetta, president and CEO of DSC Dredge, which has customers in more than 40 countries world-wide, she said. “DSC Dredge is only the third company in the program’s history to receive a second E-Star Award.”
According to the U.S. Department of Commerce, The President’s “E” Award is the highest recognition any U.S. entity can receive for making a significant contribution to the expansion of U.S. exports. In 1961, President Kennedy signed an executive order reviving the World War II “E” symbol of excellence to honor and provide recognition to America's exporters. The honorees for this year’s award helped contribute to the export of $2.23 trillion worth of goods and services in 2015, as well as an estimated 11.5 million American jobs supported by exports.
“When we first received the “E” Award back in 2008, 50 percent of our revenues that year consisted of exports, says Wetta. “Exporting is a major component of DSC’s overall growth, and in 2012 we were proud to receive an “E-Star” Award. Today, in 2016, we are once again deeply honored to receive this prestigious award.”
• America • Louisiana • Penny Pritzker