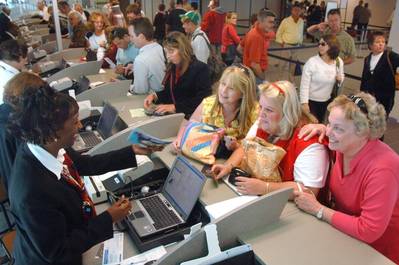 A 32 percent increase in cruise passengers at the Port of New Orleans in 2012 resulted in huge gains in employment and cruise spending in Louisiana, according to a report released this week by Cruise Lines International Association (CLIA).

CLIA’s figures also rank New Orleans as the sixth-largest cruise port in the United States, up from the ninth position in 2011.

“These figures underscore how important the cruise industry is to the Louisiana economy,” said Gary LaGrange, President and CEO of the Port of New Orleans. “Our goal is to create economic activity. And our cruise partners – Carnival Cruise Lines, Royal Caribbean Cruise Lines and Norwegian Cruise Lines – are investing in the New Orleans market with more modern and larger vessels sailing a wide variety of itineraries to all destinations in the Caribbean, Mexico, Bahamas and Key West, Fla.”

Overall, the cruise industry was a substantial contributor to the U.S. economy in 2012, generating $42.3 billion in gross output and 356,311 jobs, paying $17.4 billion in wages and salaries. CLIA’s North American cruise line members carried a record-high 16.95 million passengers in 2012, representing a 3.8 percent increase from 2011.

In conjunction with the CLIA report, Port officials retained the same firm to determine passenger and crew spending in the New Orleans region. The BREA study found more than 80 percent of cruise passengers are from out of state and 60 percent of them spend an average of two nights in New Orleans either before or after their cruise. That figure is up from 50 percent in 2010, the last year the Port measured passenger and crew spending. In addition, those passengers and shipboard crew spent $78.4 million in 2012, with lodging ($27.5 million) and food and beverage ($8.3 million) encompassing more than half of the overall spending.”

“We market cruising from New Orleans as two vacations in one,” LaGrange said. “New Orleans is a true destination city and cruise passengers see us as an additional port-of-call.”

The 2,052-passenger Carnival Elation will continue to sail year-round four- and five-day itineraries from New Orleans.