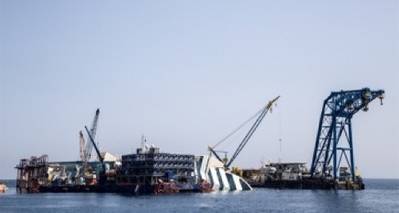 The salvage operation (known as the 'parbuckling project') to upright the wreck of the partially sunken 'Costa Concordia' has been given provisional approval by the Italian government's Civil Protection Department and is expected ot take place at a convenient date in September.

The meeting convened in Rome was at the headquarters of the Civil Protection Department and was attended by the Emergency Commissioner Franco Gabrielli, as well as representatives from the Advisory Committee, the Observatory, the Micoperi-Titan Consortium and the cruise line Costa Crociere.

Final authorization to proceed with the operation to rotate the wreck is subject to submission of all the test certificates following inspection of all the finished structures and completion of the preliminary activities required before the actual parbuckling can begin. All of this should take place by the end of next week; at any time thereafter, as soon as the sea and weather conditions are favorable, the operation torotate the wreck into an upright position can begin.

The decision taken at today’s meeting is the result of continuous work, say those concerned, with a constant exchange of information and documents between the companies contracted to remove the wreck (world leaders in marine salvage and naval engineering) and the Emergency Commissioner’s Office, particularly its Monitoring Observatory. Over the months, in fact, the potential risks associated with the parbuckling were assessed and specific precautionary measures were taken accordingly.

In this regard, a comparison was made between the risk of leaving the ship upright throughout the winter, exposed to adverse sea and weather conditions, or else leaving the wreck in its currenttilted position for the same period of time; the conclusionreached was that the former option is preferable to the latter – another winter left lying at an unnatural angle would possibly have comprised the parbuckling operation if this had been delayed until next spring.

Arrangements have also been made to inform the population of Giglio about these latest developments.