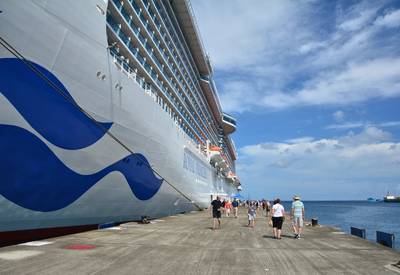 The United States is considering ways to discourage U.S. travelers from taking cruises as part of a broader Trump administration effort to limit the spread of coronavirus, according to four officials familiar with the situation.

The officials, who asked to remain anonymous, said no decision had been made. The discussions were taking place ahead of a meeting this weekend between Vice President Mike Pence, who is in charge of leading the U.S. response to the coronavirus, and the cruise industry.

The administration could advise some or all U.S. travelers to temporarily avoid taking cruises in the face of a growing number of coronavirus cases on cruise ships or potentially impose travel restrictions related to cruises, officials said.

Shares in Royal Caribbean Cruises, Carnival and Norwegian Cruise Line Holdings have fallen around 50% since January.

U.S. President Donald Trump signed a bill on Friday allocating $8.3 billion to bolster the country’s capacity to test for the new coronavirus and fund other measures to stem an outbreak that has now infected some 100,000 people worldwide.

Democrats have said Trump - a Republican who faces reelection on November 3 - has not adequately prepared the country for the possibility of a pandemic.

Trump said during a visit to a tornado-stricken area in Tennessee on Friday that his administration was exploring options to help airlines and other industries hurt by the coronavirus outbreak, according to a pool report. White House economic adviser Larry Kudlow also told CNBC that the administration was considering “targeted and timely” tax relief for such industries.

Debating measures
Trump said on Friday that he had spoken to Democratic California Governor Gavin Newsom about a cruise ship that was barred from docking in San Francisco after at least 35 people developed flu-like symptoms. The ship has been linked to two confirmed cases of the illness caused by the virus.

Officials differed on whether the dramatic step of temporarily barring new cruises was being seriously considered. Cruise lines in recent days have liberalized cancellation and rebooking policies and some cruise travelers reported ships are traveling with far less than maximum capacity.

The Cruise Lines International Association said this week cruise lines would take steps to limit coronavirus concerns, denying boarding to all persons who had traveled from hot spots including South Korea, Iran, China and parts of Italy. The group also said cruise lines would conduct illness screening for U.S. citizens who have recently visited those destinations.

The cruise industry contributed nearly $53 billion to the U.S. economy in 2018 and generated more than 420,000 jobs, according to an analysis by the association.

Senior Trump administration officials discussed the cruise ship issue on Thursday and expected to revisit it during a meeting on Friday, according to a White House official.

The U.S. Centers for Disease Control and Prevention (CDC) has said its current information suggests that older people and people with severe chronic health conditions such as heart disease, lung disease and diabetes, have a higher risk of developing a serious illness as a result of the virus.

The U.S. State Department said in guidance last month that Americans should reconsider travel on cruise ships in Asia due to the coronavirus outbreak.

The department said the situation remained “dynamic” and that any travel by ship could be subject to restrictions and quarantine by local authorities.