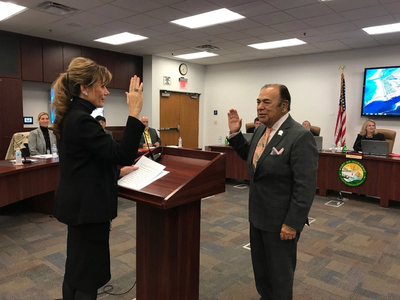 The Port of Hueneme has welcomed new leadership, as the Board of Harbor Commissioners unanimously voted Jess Herrera to serve as President for 2019.

President Herrera was first elected to the Board in 1994, and has been the longest consecutively serving Commissioner in Port history with 2019 as his 25th year of service. Herrera has a long history of serving his community including 10 terms as Executive Officer of the Internal Longshore and Warehouse Union (ILWU), as well as serving 8 terms as Chairman of the ILWU’s Southern California Regional Jurisdiction Committee; which in addition to the Port of Hueneme, also includes the Ports of LA, Long Beach, and San Diego. For 53 years, President Herrera has worked on the waterfront at the Port of Hueneme, and currently serves as a marine clerk coordinating the flow of ships and cargo in and out of the commercial Port.

During his tenure on the Board, President Herrera has overseen the generation of over 13,600 good paying jobs, the creation of the Port’s 2020 Strategic Plan to direct sustainable Port growth, creation of the Joint Use Agreement (JUA) with NBVC for access to additional berths in the harbor, and the expansion of the Port’s global reach. For example, in 2015, President Herrera led the Port of Hueneme’s delegation to create a sister Port relationship with the Port of Ensenada, Mexico. To date, this relationship has proven beneficial increasing trade between the two nations and cultivating the biotech opportunities in both Ensenada and the Port of Hueneme. Furthermore, the JUA has ensured additional revenue streams for NBVC and the commercial Port, while mandating that the monies received be kept local for projects of mutual benefit. A win-win for the immediate surrounding communities.