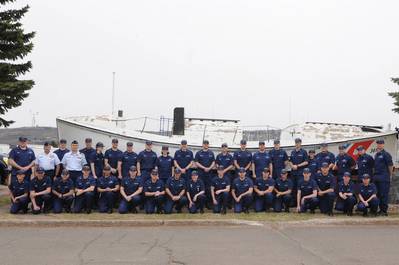 The Coast Guard Foundation, a nonprofit organization committed to the education and welfare of Coast Guard members and their families, has announced  its plans to build a community center in Sault Ste. Marie, Michigan. A top priority for the Coast Guard Foundation, the Sault Ste. Marie Community Center will give Coast Guard members and their families in the area an all-inclusive indoor recreation facility that will serve as a safe place for families to enjoy themselves and build a community during the long Michigan Upper Peninsula winters.

The Coast Guard Foundation has already raised $265,000 of the $400,000 needed to build the community center. To help reach their goal, the Foundation has launched a “Buy A Brick” program for individuals and organizations to contribute and commemorate their support for this important project, as well as add a special tribute to the outdoor landscape. The Buy A Brick campaign engraved bricks are available for $100 for a four-inch by eight-inch brick and $500 for an eight-inch by eight-inch brick.

“We are very near our fundraising goal and hope to begin the important work of building the community center this spring,” said Anne Brengle, president, Coast Guard Foundation. “With harsh winters that average 13 feet of snow, Coast Guard deployments can be very challenging there, and community and recreation opportunities are tough to come by. We are proud to support these brave individuals and their families. The center will inspire a strong feeling of community, build esprit-de-corps among the Coast Guard units as well as stand as a lasting testament to our support.”

Sault Ste. Marie is located in the far northern reaches of the Upper Peninsula of Michigan; the area is home to eight different Coast Guard units that are responsible for search and rescue, law enforcement, aids to navigation, marine safety, and homeland security on Lake Superior and Northern Lakes Michigan and Huron, including surrounding navigable waterways. Approximately 600 active duty, reserve and civilian employees plus their families are based in the area.

For over 40 years, the Coast Guard Foundation has been committed to inspiring leadership, learning and a proud legacy of service to our nation by supporting the men of women of the United States Coast Guard. The Foundation provides higher education grants to enlisted personnel, reservists and their children, higher education financial support for families of Coast Guard members lost in the line of duty, financial relief to Coast Guard families who have lost possessions in natural disasters, and support for morale programs, including funding recreation, exercise and family-oriented facilities.