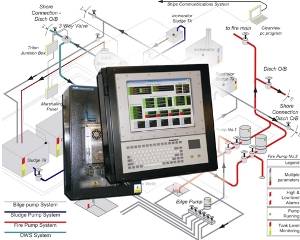 So far this year more than 18 countries have signed up to the Paris Memorandum of Understanding (MOU) to enforce Marpol pollution regulations. Last month the EU voted to criminalize pollution offences closing the net on this area of maritime pollution. Under these new policies overboard spillage of oil has led to penalties for first time offenders that include custodial sentencing of senior officers and shore based personnel in addition to fines running into many millions of dollars. According to U.S. Attorney’s published statistics violation of MARPOL I,the U.S. alone has accounted for 17 years of incarceration of those deemed to be responsible and over $200m in fines in recent years

When a Danish owner was offered mitigation of over $10m for offences under Marpol 73/78 marine pollution if they could convince the U.S. courts of an effective solution, they commissioned PSM to find a practical solution to the problem that would be fully acceptable to the USCG, who had instigated the prosecution. PSM took a different approach to the more obvious and costly solution of “padlocking” the system controls and valves to prevent tampering.  PSM showed that such devices were no deterrent by demonstrating the simplicity of defeating or bypassing them.

Their resulting ClearView is the first USCG recommended device to be installed on working vessels, allowing them to re-enter service in U.S. waters ClearView works by monitoring existing ODME equipment and other related shipboard parameters and is therefore simple to install even with a vessel in service. By making continuous calculations and logging data from the entire overboard discharge and oily-water separation  process it provides senior officers and shore based staff warnings and alarms of fault conditions and developing problems, giving them time to react or even shut down the discharge altogether. PSM argue that unless all inter-related functions are compared in this way it will always be possible for the magic pipe players to bypass the system. Since data acquisition is all done in a tamperproof program the data is now considered by the authorities to be inviolate and can fully replace or support the ORB.  Data is held for several years and may be printed out in a fully trended profile for the ORB.

ClearView can be used as a stand-alone device but, it comes with fully embedded software enabling it to transmit to the owners or operator’s remote location via D+ or LRIS or even GSM, hence providing operators warnings of critical alarms or inappropriate system operation as they occur. These critical alarm messages can be real-time transmitted via SMS / email to the owner/operator’s desktop or mobile phone.

Linked into the vessel’s D+ Satellite all log events are automatically GPS and UTC stamped and to add further reassurance Clearview can automatically “geo-fence” owner selected areas, disabling the discharge valve within territory limits and no-go zones. All activity logs can also be routed through the regular ships satellite communication system or appended to captain’s daily reports. From here the owner or Port State Control can review all historical data regarding the systems activity.