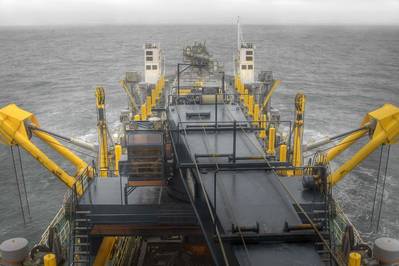 The proposed 2013 Vessel General Permit prompts vessel managers to review the portfolio of lubricants used on their vessels.

One of the Environmental Protection Agency’s (EPA) changes in the proposed 2013 Vessel General Permit for commercial vessels over 79’ is a requirement to use environmentally acceptable lubricants in certain applications. Given this proposed change, it is a good time for vessel managers to review the portfolio of lubricants used on their vessels to look for gaps in the operational performance of the lubricants, assess vessel compliance with current and proposed regulations, and align lubricant choices with the environmental values of their company and their customers. To conduct the review, the manager should have an understanding of the laws and regulations that influence lubricant choices and only then develop a framework for applying selection criteria to the decision making process.

The Clean Water Act, Oil Spill Pollution, and the Vessel General Permit
Federal regulations for the use of lubricants, whether a grease or an oil, on board vessels operating within the territorial waters of the United States are derived from language contained in the Clean Water Act of 1977 (CWA) which was later amended by the Oil Pollution Act of 1990. Section 311 of the CWA, under the title “Oil and Hazardous Substance Liability”, prohibits the discharge of oil into the waters of the United States in quantities that may be harmful. For the purpose of the act, oil is specifically defined as “oil of any kind” and the phrase “quantities that may be harmful” is defined by regulation. Also, found in section 311 of the CWA is the authority for the U.S. Coast Guard to assess fines for oil spills and to implement oil pollution control measures. Section 311 of the CWA thus prohibits the discharge of lubricants into the environment regardless of the type of base oil used (whether mineral, ester, or synthetic and whether it is environmentally acceptable or not) and directs the U.S. Coast Guard to assess fines for the discharge of oil into the environment and to conduct oil spill prevention, response, and mitigation activities. Thus, choosing a lubricant based on whether or not a fine will be assessed, or how much of a fine will be assessed, should not be a primary consideration when selecting a lubricant because the U.S. Coast Guard must treat all oils the same.

In 2008, to allow for the discharge of pollutants from vessels under normal operations, without violating the CWA, the EPA issued the first version of the Vessel General Permit (VGP). The authority to issue VGPs is given to the EPA in section 402 of the CWA as part of the National Pollutant Discharge Elimination System. The VGP sets effluent limits for 27 different sources of operational discharges from vessels. Oils and greases are one of the effluent types listed. Because the VGP is issued under the authority of the EPA and not the U.S. Coast Guard, the two agencies signed a memorandum of understanding to cooperate in the implementation and management of the program. The U.S. Coast Guard was asked to assist with education and inspection activities associated with the VGP while the authority to enforce the VGP remains with the EPA. Furthermore, the VGP only allows discharges of lubricants from normal operations in amounts that do not exceed what is defined as harmful to the environment; i.e. film, sheen, discoloration, sludge, or emulsion. The first VGP did recommend the use of environmentally preferable lubricants, but it did not require their usage, nor did it define what an environmentally preferable lubricant is. So in practice, not much changed in relation to lubrication strategies on vessels as a result of the 2008 VGP.

However, with the issuance of the proposed 2013 VGP, what are now referred to as environmentally acceptable lubricants (EAL) may become mandatory in certain applications for new vessels greater than 79 ft built after December 19, 2013. For existing vessels greater than 79 feet, the requirement to use EALs would also apply when technically feasible. “Environmentally acceptable lubricants” means lubricants that are “biodegradable” and “non-toxic” and are not “bioaccumulative”. A lubricant must meet specific standards included in the revised VGP to be classified as an EAL.

The applications listed in section 2.2.9 of the proposed 2013 VGP that would require an EAL are, “Controllable Pitch Propeller and Thruster Hydraulic Fluid and Other Oil-to-Sea Interfaces including Lubrication Discharges from Paddle Wheel Propulsion, Stern Tubes, Thruster Bearings, Stabilizers, Rudder Bearings, Azimuth Thrusters, Propulsion Pod Lubrication, and Wire Rope and Mechanical Equipment Subject to Immersion”.  In general, assessments for EAL usage should be made for mechanical equipment using hydraulic fluid to power propulsion, mechanical equipment below the waterline that use seals to separate lubricant from water, and any equipment that uses lubricants in an open system such as wire rope or open gears than may be immersed in water.

Suggested Framework for Assessing Lubricant Choices
To assess the correct lubricant for the application, the vessel manager can combine the regulatory criteria presented above with criteria specific to the application and with company and customer environmental values. To begin, place the lubricants into one of four categories. In the first and second categories, place all applications that are used external to the vessel and above the waterline; e.g. wire ropes, winches, anchor windlasses, and deck cranes. Then further separate these into lost in use or captured use categories. A ‘lost in use’ would be an open system such as the open gears on a deck crane. A ‘captured use’ would be a closed system such as a hydraulic driven winch. In the third group, place all applications that are used below the waterline and either have a mechanical oil-water interface or are used to power propulsion systems. And, in the fourth group, place all applications that are below deck and internal to the vessel.

Assess each category as follows:

This suggested framework for assessing lubricant options is based on an understanding of current and proposed U.S. regulations. The proposed 2013 VGP will take effect in December of this year, so it is not too early to begin assessing the potential impacts to vessel operations.

(taken from the March 2012 print edition of MarineNews magazine).

Ben Bryant is Marine Market Manager at Klüber Lubrication, responsible for developing new business in the marine industry. He is a graduate of the Massachusetts Maritime Academy and holds a 1,600 ton masters license with experience on oil tankers, offshore supply vessels, tug and barge units, and various small power and sail vessels. He recently earned a Masters of Marine Policy from the University of Rhode Island and holds a Master in Business Administration from Boston College. Contact Ben at: ben.bryant@us.kluber.com

Training Tips for Ship: #8 - The Lecture is Dead