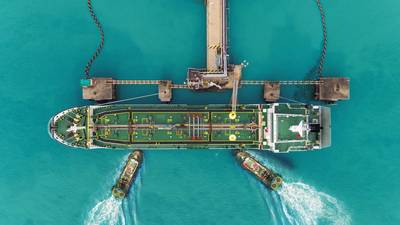 China has approved a long-awaited tax waiver on exports of cleaner ship fuel, paving the way for refiners to boost output, though Beijing may initially limit shipments to focus on growing its coastal marine fuel market, state refiner officials say.

Ships globally have switched to lower sulphur fuels, or use emissions-removing devices, to comply with new rules imposed by the International Maritime Organization this year.

China's State Council, or cabinet, gave the go-ahead to waive taxes on the 0.5% or very low sulphur fuel oil (VLSFO), smoothing the path for the final launch of the policy to kick off Chinese production of the fuel.

"(Our) company was informed yesterday about the tax waiver approval, so we're getting ready for production plans," said one of the officials with a state-owned refiner, who declined to be identified as he was not authorised to speak to media.

China's Ministry of Finance, the State Administration of Taxation and its powerful economic planner, the National Development and Reform Commission, did not immediately respond to Reuters' requests for comment.

China has a levy of a 1,218 yuan ($175.73) per tonne consumption tax and 13% of value-added tax on fuel oil production, costs that make its refiners unable to compete with regional suppliers like Singapore and South Korea.

The world's largest oil importer has been relying on imports from Singapore to meet its demand and the move will help improve regional supplies of the new fuel.

Market players had long anticipated Beijing's move, but will keep close watch for the exact timing as that will decide when China's massive production will start to flow.

Beijing is likely to restrict, or even ban, wholesale exports of the ship fuel, to let companies focus on growing the domestic marine fuel market, as coastal cities like Zhoushan in eastern Ningbo province aims to become a regional bunkering hub.

"This has been one of the feedback views during the long discussions of the policy formulation, and this will be implemented in the initial stage," said a second oil official.

Chinese refiners will supply the new VLSFO to bonded storages along the country's coast, and from there they will be retailed to ships by about a dozen licensed bunker dealers.

Supplies to bonded tanks are considered as exports and will be managed by a quota system.

(Reuters reporting by Chen Aizhu in Singapore and Xu Muyu in Beijing; Editing by Clarence Fernandez)