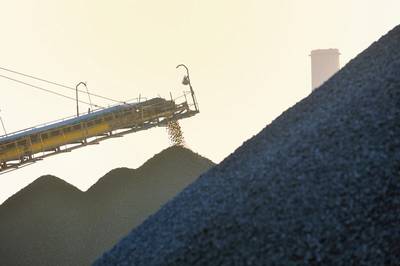 The seaborne iron ore market appears to be in something of a sweet spot currently, with largely steady demand and prices that have been flatlining for the past couple of months.

Of course, another way of saying that a market is enjoying relatively stable and good times is that it's boring, but in iron ore there is plenty of action bubbling beneath the seemingly calm exterior.
It's not so much that iron ore prices or volumes are expected to shift dramatically in the coming months, it's more that structural changes in the world's biggest importer, China, are re-shaping how the industry works.
China imported 353.4 million tonnes of iron ore in the first four months of 2018, a mere 0.2 percent more than the same period last year, according to customs data.
Prices have largely reflected this tepid demand growth and the fact that additions to supply have been modest.
The price of benchmark ore with 62 percent iron content at China's Qingdao port, as assessed by Argus Media, stood at $65.05 a tonne on Monday, largely unchanged since last March.
It's down 12 percent since the end of last year, but is still within the broad $60-$80 range that has persisted since the middle of last year.
The big iron ore story of last year is still present, namely the widening of the premium for high grade ore and deepening discount for lower quality ore.
Ore with 65 percent iron ended at $84.10 a tonne on Monday, down 4 percent from the end of last year, while 58 percent ore finished at $53.05, down 9.4 percent since the end of 2017.
The discount from benchmark 62 percent ore to the 58 percent grade has averaged 35 percent over the past year, according to data from consultants Wood Mackenzie.
This is a massive increase in the spread, which more usually was around 5 to 10 percent until it started widening from mid-2016 onwards.
STEEL PROFITS
This dynamic follows structural changes in the vast Chinese steel sector, including the closure of older, inefficient furnaces, the consolidation of steel makers and policy-driven moves to reduce air pollution.
The main market impact they had was to boost the profitability of steel mills. None of these trends are likely to reverse, or even slow, in coming years.
Wood Mackenzie research director for iron ore, Paul Gray, told a media briefing in Singapore on Tuesday that the margin on steel rebar for mills in China is currently as high as 1,000 yuan ($157) a tonne.
This isn't a level Wood Mackenzie, or indeed most analysts, expect is sustainable over the longer term, with Gray expecting it to drop to around 200 yuan a tonne in coming years.
Assuming this forecast is on the money, the interesting question then becomes what happens to the premium for high-grade ore and the discount for lower quality?
The switch to high-grade ore was driven by Chinese steel mills enjoying extraordinary profits and seeking ways to maximise output. They can produce more steel by using high-grade iron ore than lower quality ore.
But as profit margins contract for steel mills, the economics are likely to switch, with higher-grade ores losing out to medium and lower grade material as input costs trump the need to maximise output.
Wood Mackenzie expects the discount for lower grade ore to narrow as the steel profit margin shrinks, but not to the levels seen previously. Rather it will be some 10 percentage points wider.
Even this expectation is premised on Chinese steel mills placing economics above all other considerations when working out how to deal with lower steel margins, something that they may not be able to do.
Much will depend on how the authorities in Beijing and steel-producing provinces develop policies to reduce emissions, and the signs are that these will get stricter over time.
This may well force steel mills to continue to use higher grade ore, even if it would be cheaper to switch to lower quality.
This in turn has implications for iron ore miners, especially producers of lower quality grades, such as Australia's Fortescue Metals Group.
Fortescue, the third-biggest producer in the world's top iron ore exporter, enjoys low production costs and can still be profitable at low prices for its ore. It may have to consider longer-term plans to diversify away from China, or improve the quality of its product.
The miner is already selling more iron ore to India, but these flows are small compared to its overall production.
Other producers of lower-grade ore may find themselves uncompetitive, including some smaller Australian miners, those in Iran and Chinese domestic producers.
Conversely, Brazil, the top producer of higher grade ores, stands to benefit, as does South Africa, another producer of higher grade ore and the third-biggest exporter to China.
Overall, the picture of steady seaborne volumes and prices stuck in a range may continue for the rest of 2018, but within the market significant changes are afoot.
(Reuters, editing by Richard Pullin)
• Fortescue Metals Group • media briefing • Oregon