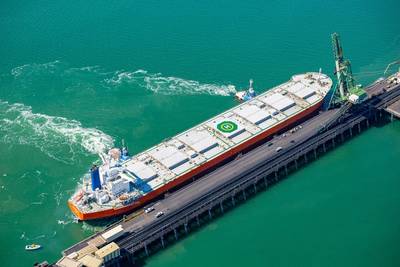 Australia is investigating media reports that China has stopped taking its coal shipments, Prime Minister Scott Morrison said on Tuesday, adding that such import quotas to support China's market were "not uncommon".

Trade industry reports late last week suggested that some Chinese ports had been told not to accept Australian thermal and metallurgical coal, and that Australian shipments were being sold along to other markets at the last minute.

China's imports of coal had been expected to slow in the second half, after heavy imports earlier this year met with weaker than expected demand due to coronavirus-related disruptions.

"When it comes to coal, in China they do have their own coal industry and it is not uncommon that from time to time the Chinese government will have domestic quotas to support local production and local jobs in China," Prime Minister Scott Morrison told journalists at a briefing in Queensland state.

"The arrangements they put around domestic quotas in coal production is not unusual," he said, adding that Australia's trade minister was investigating.

Traders and analysts said the halt could protect China's its own struggling coal industry while allowing the perception it was taking a swipe at Australia without making such a move official.

China imposed hefty duties on barley in May and in August said it would investigate whether Australian wine was being dumped into its market.

"We think it's another concerted effort by authorities to support the domestic market," ANZ analyst Daniel Hynes said in a report. "As such, we don't see any medium term implications. Nevertheless, this will weigh on prices of premium hard coking coal. Cargoes are taking a long time to be sold amid the confusion, with buyers treading carefully."

Singapore coking coal futures and Newcastle thermal coal futures fell to their lowest in around two weeks on Monday, the most recent data showed.

Still, two traders and two analysts, speaking on condition of anonymity because of the sensitivity of the matter, pointed to China's aggravation with Australia's political positions as a factor behind the decision.

Australia's call for an independent inquiry into the origins of the novel coronavirus - which first emerged in China - further angered the government in Beijing.

On Oct. 8, trade publication IHS Markit reported that authorities at ports in Bayuquan and Jingtang in northern China and Fangcheng in the south had told buyers that Australian cargo would be rejected from discharge and clearing, effective Oct. 1. China's "Golden Week" public holiday spanned Oct. 1-7.

China is the biggest importer of Australian coal, taking 27% of its metallurgical coal in the year to June and 20% of its thermal coal. Coal was Australia's second-largest export last year, behind iron ore, worth A$55 billion ($39.52 billion).

In the past month, China's overall coal imports have been trending lower, with a steep drop seen in Australian cargoes and a milder drop seen in those from Indonesia, against an uptick in imports from Russia, China customs data showed, according to Rodrigo Echeverri at Noble Group.

Analysts forecast imports to fall by a quarter this year from last to about 80 million tonnes.