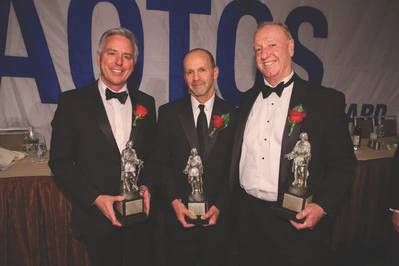 The maritime industry's most prestigious award was presented at the 46th annual gala held at the Sheraton New York Times Square Hotel, New York City, on November 13, 2015. At this gala, the recipients shared the evening with a group of American seafarers who were recognized by the USS for specific acts of bravery at sea.

All three recipients shared a history of early family ties to the maritime industry.  Mr. McKenna spoke of his father-in-law introducing him to the waterfront nearly 45 years ago. Mr. Cox, who heads a 133-year -old ocean carrier, spoke of a seafaring grandfather. Mr. Chiarello is a fourth generation family member involved in the maritime industry.

At the close of the evening, USS presented a special remembrance in honor of the 28 American crewmembers of the EL FARO and five Polish nationals who perished at sea on October 1, 2015 during Hurricane Joaquin.

Led by Mr. Chiarello, who dedicated his AOTOS to the 33 heroes, said: "This is a year wherein I am personally unable to accept such a singular honor. Each of us here at this maritime industry gathering will appreciate the gravity and the impact that the loss of the EL FARO and her officers and her crew had on TOTE Maritime." He added, "Within the firm, each of us has shared the anguish and the grief thrust so unmercifully upon the families and friends of those who were lost. Our hearts are torn bearing witness to their suffering."

Mr. Chiarello continued, "This year, with the leave of the United Seamen's Service and by the leave of those of you here with me this evening, I'd ask that we put aside any honor meant expressly for myself, and that we honor instead the valiant men and women that comprised the officers and the crew of the EL FARO. This evening, they deserve the AOTOS award far more than I do."

Proceeds from the AOTOS event benefits USS community services abroad for the U.S. Merchant Marine, seafarers of all nations, and U.S. government and military overseas.

USS continues to provide community services for the U.S. Merchant Marine, the American Armed Forces, and seafarers of the world.  USS, a non-profit agency established in 1942, operates centers in six foreign ports in Europe, Asia, and Africa and in the Indian Ocean, and also provides seagoing libraries to American vessels through its affiliate, the American Merchant Marine Library Association.