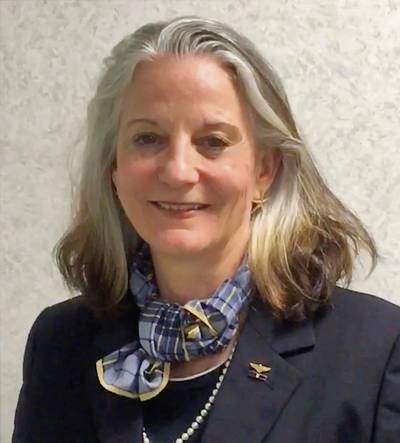 Rear Adm. Wendi B. Carpenter has been named the Executive Director of the Captain Phillips and Lane Kirkland Maritime Trust.

She has served as a Board Member of the Trust since shortly after its inception and has been closely involved with its administrative set up, strategic planning and governance.

Carpenter is a pioneer of women in Naval Aviation and was the first woman aviator to be promoted to the flag rank in the U.S. Navy. During her distinguished 34-year career, she served in leadership roles that included deputy commander of the U.S. Second Fleet and commander of the Navy’s Warfare Development Command (NWDC).

In her final assignment at NWDC, she was instrumental in warfare concept generation and development and led the Navy’s efforts in the development and integration of unmanned systems, serving in key areas that included organizational transformation and technology development.
After her retirement from the Navy in August 2011, she served as president of the State of New York Maritime College. She led the college through the 10-year reaccreditation process of the Middle States Commission on Higher Education as well as the five-year U.S. Coast Guard recertification process. During her tenure, the school set new benchmarks in graduation rates and fundraising.

She is a frequent speaker on the topic of leadership and particularly enjoys participating in programs designed to motivate young people.
“The Captain Phillips–Lane Kirkland Trust is pleased and honored to have Admiral Carpenter at the helm to help execute the organization’s mission of furthering awareness of the maritime industry and its opportunities as an excellent and unique career path,” said Chairman of the Board Klaus Luhta.

The Captain Phillips–Lane Kirkland Maritime Trust Foundation is a 501(c)(3) charitable trust created to promote the long-term strength of the U.S. maritime industry and the American Merchant Marine by generating public awareness, assisting high achieving individuals who want to pursue careers in maritime and advocating for public policy to ensure the viability of the industry and its workforce.