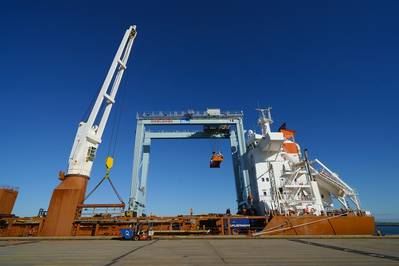 On Saturday, November 2nd, the Massachusetts Port Authority (Massport) received two new rubber-tired gantries (RTGs), increasing the number of RTGs at the Paul W. Conley Container Terminal to 16. Adding equipment is part of an $850 million investment to keep Conley Terminal competitive and efficient with truck turntimes averaging under 35 minutes. Another two RTGs were also delivered back in May.

The Port of Boston contributes over $8 billion to the regional economy and supports more than 9,000 direct jobs. In FY2019, Conley Terminal set a new record in cargo volumes for the fifth consecutive year. The terminal handled 307,331 twenty-foot equivalent units (TEUs), an 8% increase over FY2018. To date, volumes are up 4% versus the same time period in 2018. This consistent growth can be attributed to a strong regional economy, the higher levels of productivity, and the increased demand from both importers and exporters to utilize a virtually congestion-free terminal.

Massport is investing in waterside and landside infrastructure to keep Conley Terminal efficient and cost-effective. In 2017, Massport took the trucks off the neighborhood streets by building the Thomas J. Butler Freight Corridor, a $75 million dedicated roadway for container trucks entering and leaving Conley Terminal. This project is one of several that focus on creating efficient connections from Maritime facilities to the interstate highway system.

Another major infrastructure project initiated in the last several years is the Boston Harbor Dredging Project. The deepening of the main ship channels will be completed by the end of 2021. The $350 million project is a partnership between the U.S. Army Corps of Engineers, the Commonwealth of Massachusetts, and Massport. The project is approximately 64% complete, with over 7.4 million cubic yards removed to date.

In 2020, work on a new 50-foot deep berth is expected to be completed. The $215 million modernization project includes 3 new ship-to-shore cranes. They will be 205 feet high and 160 feet high from the rail, with an outreach of 22 rows wide, capable of handling 12,000-14,000 TEU ships. These cranes are specially designed to avoid air draft restrictions due to nearby Boston Logan International Airport. Terminal improvements totaling $103 million (including a new in-gate processing area and a new reefer rack system) are also taking place, and 90% of these projects are underway. Landside improvements were made possible with the help of a $42 million FASTLANE grant.