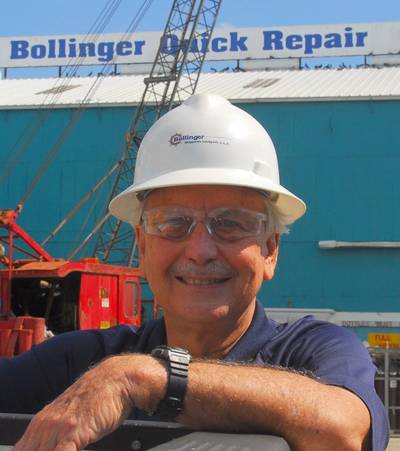 Marmillion’s retirement was announced by Bollinger’s Chief Operating Officer, Ben Bordelon, who said, “Dave has been an integral part of Bollinger’s growth and a mentor to many in the shipyard industry over the past 46 years. Dave’s loyalty, focus on client satisfaction, knowledge of the industry, leadership, pride and professionalism are some of his strongest traits that have been a cornerstone for Bollinger.”

Marmillion started his shipyard career as a lifelong resident of the New Orleans Westbank area.  He attended West Jefferson High School and graduated from Southeastern Louisiana University, Hammond, Louisiana in Industrial Technology. After a short time in the aerospace industry, Marmillion began his career in the marine industry with Avondale Shipyards at their Harvey Quick Repair yard in 1968.

He worked his way through the ranks, holding several positions, and was made Operations Manager of the facility shortly after Bollinger purchased the yard in 1993. In June of 1994, he was promoted to Vice President and General Manager. Marmillion was then promoted to Vice President, Inland Repair Operations and assumed responsibilities for repair operations at four (4) shipyard facilities for Bollinger.

Bollinger Executive Vice President Charlotte Bollinger said, “Some people find the passion for their life's work early in their career.  Dave did exactly that. That happy choice brought Dave into numerous leadership roles within the shipyard industry.  He listened to his customers both internally and externally.   His wonderful smile and people skills worked perfectly with the Bollinger family atmosphere and culture.  He will be missed even as we wish him a healthy and happy retirement.”

Bollinger add that Marmillion is past co-chairman of the American Waterways Shipyard Council (AWSC) and has held chairs for the Safety, Environmental and Human Resources Committee of the Shipbuilders Council of America (SCA). He held board positions for the Louisiana Association of Waterway Operations & Shipyards (LAWS), and for many years represented Bollinger with the American Waterways Operators (AWO).

“It’s with mixed emotions that I retire”, said Marmillion.  “The repair business is a 24/7/365 commitment that requires a personal dedication from those involved and understanding from family members. I loved working in repair and will miss the many people that I’ve formed personal relationships with throughout the years. Those people, many of them working “in the trenches”, are truly the ones responsible for the success that Bollinger and I have enjoyed.”