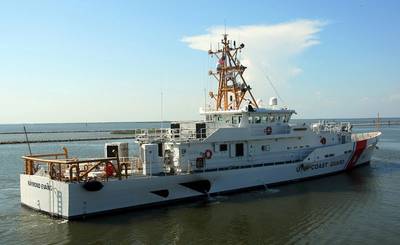 The announcement was made by Bollinger President, Chris Bollinger: “We are extremely proud to announce the delivery of the Raymond Evans, the latest FRC built by Bollinger, to the 7th Coast Guard District in Key West, Fla. The Raymond Evans, as well as the previous nine FRC deliveries, were proudly delivered on time and on budget. We look forward to the vessel’s commissioning, honoring and celebrating the heroic acts of Commander Raymond Evans.”

The 154 foot patrol craft Raymond Evans is the tenth vessel in the Coast Guard's Sentinel-class FRC program. To build the FRC, Bollinger used a proven, in-service parent craft design based on the Damen Stan Patrol Boat 4708. It has a flank speed of 28 knots, state of the art command, control, communications and computer technology, and a stern launch system for the vessels 26 foot cutter boat. The FRC has been described as an operational “game changer,” by senior Coast Guard officials.

Each FRC is named for an enlisted Coast Guard hero who distinguished him or herself in the line of duty. This vessel is named after Coast Guard Hero, Commander Raymond Evans. Evans, who began his career as an apprentice seaman, was part of a dramatic rescue of a group of Marines pinned down by machine gun fire during the battle of Guadalcanal in September, 1942 where he earned the Navy Cross. Evans performed his mission with valor and bravery.