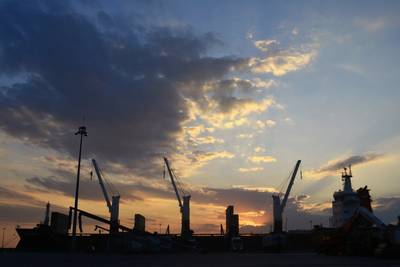 The bidders for a 67% stake in the port were Quintana Infrastructure and Development through Liberty Port Holdings Single Member, and International Port Investments Alexandroupolis, a joint venture of Black Summit Financial Group, Euroports, EFA Group and GEK Terna, the agency said in a statement.

The deadline for the bids expired earlier on Thursday. The bidders were among four investors that had been shortlisted last year for the sale.

Situated in northern Greece, near the borders with Bulgaria and Turkey and with a floating gas storage and regasification unit in the pipeline, Alexandroupolis has potential as an energy hub for central Europe.

The agency will unseal the financial offers that meet the terms of the tender at a later time, it said.

Athens' quest to attract private investment in some of its regional ports as part of a wider plan for privatizations to boost economic growth has been revived as uncertainty linked to the COVID-19 pandemic eased.

A consortium of Attica Holdings with Aktor Concessions, a consortium of Grimaldi Euromed with Minoan Lines and Investment Construction Commercial and Industrial, and the Thessaloniki Port Authority have bid for a 67% stake in the northwestern port of Igoumenitsa.

In a separate announcement after unsealing their bids on Thursday, the agency said it has asked all three bidders to raise their offers. It did not disclose the size of each offer.