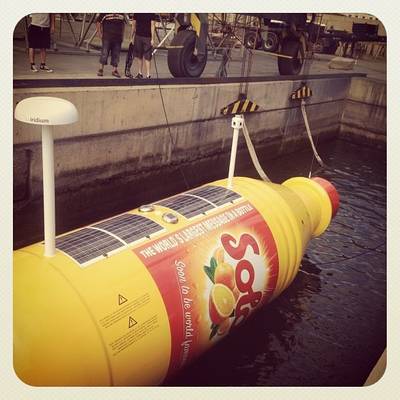 The world’s largest message-in-a-bottle will be released shortly, 200 nautical miles off the coast of Tenerife, Canary Islands.

The bottle constructed by the owner of Norwegian company Koeningsegg is registered as a boat, and will be tweeting photos live via satellite as it drifts in the Atlantic Ocean, having been christened by well- known explorer Jarle Andhøy with beauty queen 'Miss Tenerife'.

Inside the bottle is a quantity of bottles of the company's soft-drink product 'Solo' as well as a fitting 12 square meter letter to the finder.

"We are turning back time, letting nature decide where the bottle will end up", says explorer Jarle Andhøy who believes the 26 feet and 2.5 ton wonder might follow the path of Thor Heyerdahl’s RA-expedition and end up in Barbados.

"This is our most spectacular project to date and we have taken all kinds of safety measures. Apart from obvious things like towing it 200 nautical miles off shore, it has the required navigation lights, Automatic Identification System, radar reflector and state-of-the-art tracking technology. We will monitor it continuously and if needs be, use a tugboat to get it safely ashore wherever it ends up", says Joakim Sande, CEO of Solo.

However, no safety feature could help Sady Chavez Diaz (21) currently 'Miss Tenerife', who was doing a photo shoot on the bottle just before the send off but fell off the slippery yellow giant and ended involuntarily in the ocean.

Toft Takes the Helm at MSC