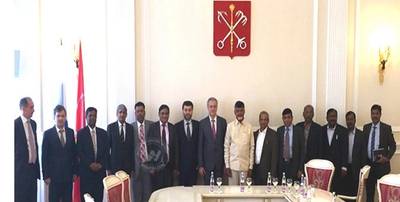 AP has signed a Memorandum of Understanding (MoU) with Russia's State Marine Technical University to promote marine education and technology.
The agreement was signed at the port city of St. Petersburg on the first day of AP Chief Minister N. Chandrababu Naidu's visit to Russia on Wednesday. The Chief Minister held consultations with the heads of the university during his tour.
The representatives of the university have also signed an MoU with the Andhra Pradesh government on exchange of investment and naval technology between the two states.
The university works in close connection with the United Shipbuilding Corporation and Rosoboronexport and would now share its expertise with Andhra Pradesh. The university’s 60 per cent of the graduates are employed in ship building activity.
The varsity offered courses in marine economics as also maritime law to familiarise budding engineers in law and economics related aspects of the seas.
Companies involved in the marine segment in India and Andhra Pradesh will benefit from this collaboration, said a government statement.
The Chief Minister welcomed the university’s decision to have its base in Andhra Pradesh and briefed him the facilities available in the State for the ship building and water transportation.
“We are planning to promote inland water transportation, both passenger and cargo. The State has a good number of rivers and canals that could be used for water transportation,” he said.
• Andhra Pradesh • maritime law • naval technology