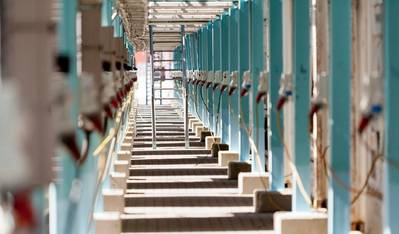 The international container terminal operating company headquartered in The Hague, APM Terminals said that its terminal at Aarhus, Denmark has broken records for reefer volumes, despite murmurings of global downturns. The company attributes it’s growing reefer business to its flexible approach.

The latest figures for the terminal, August year-to-date (YTD), show an increase of more than 4% in reefer volumes compared to the same period in 2018. Helle Almind, Head of Commercial for APM Terminals sees signs of the trend continuing, with an extremely strong start to September, and higher volumes forecast until the end of the year.

This month the terminal also beat its existing record for the number of reefers loaded onto one service. The terminal loaded 941 reefers onto Moscow Maersk, which has a total of 1,200 reefer plugs available. A large part of the consignment was Danish pork, from Danish Crown, one of the world’s largest exporters and one of Europe’s largest producers of pork.

“We are seeing a very positive development of our reefer export especially to China and we expect it to continue at least rest of year,” explained Danish Crown Logistics Manager, Morten Rokkjær Østergaard. China, the world's largest pork market has been ravaged by an outbreak of African swine fever and has lost more than 100 million pigs in the last year, either because of disease or because farmers don't want to restock pigs after they die.

“Most of our container export is via APM Terminals in Aarhus,” says Østergaard. “We are very pleased with our cooperation with APM terminals Aarhus because of their flexibility and ease of doing business.”

A flexible approach to customer requirements, is something that Almind is keen to reinforce. “Despite consistently ranking among the most productive container terminals in Europe in terms of crane moves per hour and overall berth productivity, this doesn’t mean that our processes rule out flexibility,” she says.

“We understand that flexibility is key for cold chain products and offer flexible container turn in and empty release hours. Having around 1,000 plugs for laden reefers and additional plugs for Pre-Trip Inspections (PTIs) also provides us with more flexibility for storage and delivery times. Our modern gate system, including a smartphone App for pre-registration ensures deliveries to the terminal are as smooth as possible with annual average Truck Turn Times of under 25 minutes. We also provide VGM for around 55% of exports, which provides customers with a completely seamless process.”