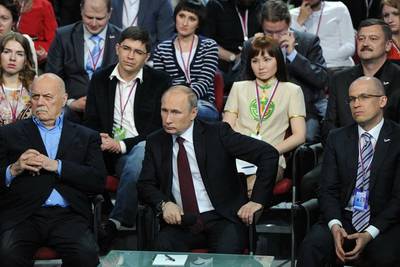 Brent crude futures rose by more than a dollar a barrel on Thursday as mutual accusations of aggression by Ukraine and Russia raised concerns over future oil supplies, while strong U.S. economic data suggested higher demand.

Ukraine resumed its operation to disarm pro-Moscow separatists in the east of the country and retake their positions, killing five and prompting Russia to launch fresh military drills close to the Ukrainian border.

Russian President Vladimir Putin warned of "consequences" if Kiev used the army against its own people. His Ukrainian counterpart demanded Russia end its "threats and blackmail" and pull back troops from the border.

Having already risen a dollar a barrel, Brent jumped a further 30 cents after Ukraine gave Russia 48 hours to give it an explanation of its military exercises by the border.

"Between the rhetoric flying round amongst the various bodies - the Russians, the president of the United States, the Ukrainians themselves - it's just gotten heated up," said John Kilduff, partner at Again Capital LLC.

"It's not calming down, it's getting worse and we continue to see oil very reactive to that," he said, adding that once Brent had broken through the $110 technical level earlier in the day, it may rise "a few more dollars on top of that".

A cut in Russian supplies of gas to Ukraine would increase demand on oil products as replacement fuels. In addition, any further Western sanctions against Russia could cause disruptions in supplies from the world's second largest oil exporter.

U.S. President Barack Obama said more sanctions were "teed up" against Russia if it fails to deliver on promises made in an agreement in Geneva last week to ease tensions in Ukraine.

Rebels in eastern Libya said two terminals would remained closed as the government had not implemented its part of a recent deal to end an oil blockade.

Supply at the North Sea Buzzard oilfield, the biggest contributor to Forties, was cut by a quarter, a trade source said. Forties is one of four crude streams underpinning Brent.

Strong economic data in the United States lent additional support to the U.S. oil prices, which have been otherwise weighed down by strong supplies as crude oil inventories rose to their highest levels on record last week.

Government data showed orders for long-lasting manufactured goods rose 2.6 percent in March, more than expected, in the latest of industrial, retail and employment reports that suggest the economy has gained steam after a troubled first quarter.

U.S crude oil stockpiles rose to 397 million barrels last week, according to Department of Energy data issued on Wednesday, the highest level since record-keeping began in 1982.

"The immediate demand-supply dynamic is negative, but Ukraine is the wild card that is stopping the market from declining further," said Ric Spooner, chief analyst at CMC Markets. "For the near term, I see markets largely neutral, trading in a range with a downward bias."