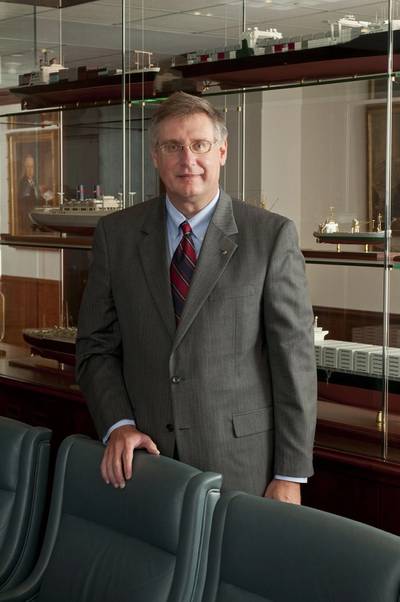 ABS Chairman, President and CEO, Christopher J. Wiernicki, was honored for his contributions to the maritime industry by the United Seamen’s Service (USS) as a recipient of the Admiral of the Ocean Seas Award on October  28, 2016 in New York.
“I am humbled to accept this award, not for me, but rather on behalf of the more than 5,000 worldwide employees of ABS and the 1.5 million mariners who day in and day out keep this industry moving and our global economy expanding,” Wiernicki said. “They are the real and unsung heroes of this industry.”
The award is conferred on those who have made noteworthy contributions to the maritime industry. Wiernicki joined industry leaders Arthur E. Imperatore, Founder and President of New York Waterways, and Donald Marcus, President of the International Organization of Masters, Mates & Pilots, who also were recognized at the USS event. The award recipients shared the evening with a group of American seafarers who were honored for acts of bravery at sea.
In his remarks, Wiernicki thanked the USS and industry executives in attendance whose “vision and leadership propel the shipping industry forward every day and remind us of the importance of maintaining a vibrant U.S. flag fleet and a strong merchant mariner workforce base directly supporting our nation’s economic and national security. We can never truly thank enough the courageous mariners who sail the world’s oceans and waterways as well as the families that support them at home each and every day,” he said.
Wiernicki holds a Bachelor of Science degree in Civil Engineering from Vanderbilt University, a Master of Science degree in Structural Engineering from George Washington University, where he was later elected to the George Washington University Engineering Hall of Fame, a Master of Science degree in Ocean Engineering from Massachusetts Institute of Technology (MIT) and honorary Doctor of Science degrees from Maine Maritime Academy and SUNY Maritime College. Wiernicki is a Fellow with the Society of Naval Architects and Marine Engineers. He was awarded the Vice Admiral Emory S. Land Medal in 2013 for outstanding accomplishment in the marine field and was inducted into the International Maritime Hall of Fame earlier this year. Wiernicki lectures at the university level on topics ranging from leadership to technology and serves on the Board of Trustees for the Seamen’s Church Institute as well as numerous University Boards and Advisory Councils.
Proceeds from this AOTOS event benefit USS community services abroad for the U.S. merchant marine, seafarers of all nations and U.S. government and military overseas. USS also provides community services for the U.S. Merchant Marine, the American Armed Forces and seafarers of the world. A non-profit agency established in 1942, USS operates centers in six foreign ports in Europe, Asia, Africa and in the Indian Ocean and provides seagoing libraries to American vessels through its affiliate, the American Merchant Marine Library Association.
• Africa • American Merchant Marine Library Association • Board of Trustees