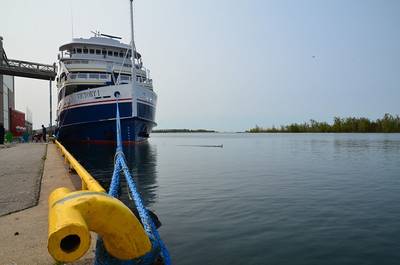 Maintaining the 10,400 CMS outflow still results in a significant cost to the economy, with an estimated $2.3 million to $3 million in business revenues lost for every day it’s in place due to delays for all ship transits through the Seaway.

The Chamber’s ship operators are following all of the new speed restrictions and additional mitigation measures developed by the Seaway to ensure the highest safety standards to accommodate these outflows of water. The Chamber’s operations group has had positive feedback thus far from ship captains that current water conditions are safe.

Raising water flows beyond 10,400 CMS would have significantly more severe economic repercussions.  The River Board has circulated a number of scenarios to stakeholders for feedback which would result in stop and go scenarios or sustained closure of the St. Lawrence Seaway to navigation. Chamber analysis shows these would result in an estimated $759 million to $1.3 billion in business revenue losses to the Canadian and U.S. economies depending on the scenario.

Lost time cannot be made up later in the season. There is a reduced amount of cargo that can be transported.

In the United States, stop-and-go scenarios or complete shutdown would, for example, disrupt grain exports from the Dakotas, Minnesota, Michigan, Ohio and Indiana; and Minnesota iron ore exports to Canada and overseas, as well as impacting Quebec aluminum imports to Oswego (New York) and Toledo for automotive and appliance manufacturing; raw material imports for steel production in Ohio and wind energy components for projects in Minnesota.

In Canada, halting navigation would severely impact Western Prairie and Ontario grain exports as well as the delivery of supplies to steel manufacturers across Ontario, gasoline and jet fuel supplies for the Greater Toronto area, and construction materials and road salt to cities in Ontario and Quebec to name just a few examples.

The Seaway is a crucial component of the integrated transportation system that moves goods throughout the Great Lakes and St. Lawrence River region serving a population of over 150 million residents in Canada and the U.S.  The Seaway supports a more diversified international trading agenda, with traffic having grown 17% in the last two years. Port activity on the Great Lakes-St. Lawrence Seaway portion of the waterway generates (USD) $35 billion in economic activity across the region and supports 238,000 jobs in Canada and the U.S.